Does Eating Cheese Give You Nightmares?

by Steven via Email 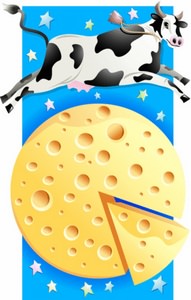 Does eating cheese give you nightmares? How about eating certain types of cheese just before bedtime? I was just wondering since I just ate a whole lot of cheese and its just gone midnight...

Rebecca says: Great question! I have often wondered about this rumor myself... To find out, The British Cheese Board (oh dear) carried out a scientific investigation in 2005 in which participants were asked to eat a small 3 ounce piece of cheese before bedtime. They kept a record of their dreams and nightmares to detect any patterns and see if they really could induce cheese dreams.

Interestingly, 75% of volunteers said they slept pretty well every night and most of those could remember and report their dreams (can't remember your dreams?). This led the Cheese Board to conclude that the essential amino acid in milk - called tryptophan - was having its effect on the cheese-eaters by normalizing their sleep patterns and reducing stress levels.

Now comes the really strange part... In an interview with National Public Radio, Nigel White, the Secretary of The British Cheese Board, explained that people eating Blue Stilton cheese before bedtime reported very vivid dreams - not necessarily nightmares, but certainly wacky in their content.

So, does eating cheese give you nightmares? According to The British Cheese Board, the answer is no. But it does appear to increase dream intensity, which helps you to remember more dreams, and produces more vivid and emotionally charged dreams, depending on the type of cheese you eat...