Am I Crazy? My Dream Was So REAL!

By Heinrich via The Lucid Dreaming Forum

I dreamed I was alone in bed. Then, this person crawled into bed with me. I was shocked. All she was wearing were panties. I knew it was not a lucid dream as I would have had sex with this person if I could have. Instead, I spent much of the dream wondering what she was doing in my bed... I was so convinced it was real. 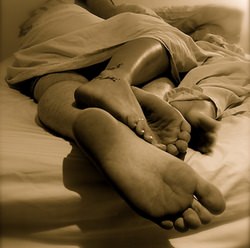 At one point, she put her leg over my body. I reached down to rub my hand up and down her smooth / slightly stubbled thigh. She smiled at me. I just looked at her with a puzzled look on my face. I asked myself if I was dreaming and a voice in my head said: "How could you feel her leg if this is a dream?" I've never had a dream where I could feel and remember texture. I began to touch her breasts. (My apologies for being graphic.) I could feel her nipples getting hard. None of this made sense but it was like I was in an intersecting universe.

As I reached towards her panties, all sense of texture disappeared. It was like Christopher Reeves in Somewhere in Time. My dream image started to fall apart like a jigsaw puzzle. I woke up in shock and said "Oh my god". I was breathing really hard. I repeated OMG about 5 times. I couldn't believe how real this dream was. Unlike a lucid dream (which I have much experience with) I had no desire to return to this dream. It felt like it wasn't a dream.

My wife woke up and I asked her: "Was I talking in my sleep"? She replied: "No". I asked: "Was I touching you"? She said she had her back to me, sleeping. I told her I had just had a dream that didn't seem at all like a dream. She asked me what it was about. All I could say was, I don't want to talk about it.

I really feel like my brain is losing it's ability to tell the difference between the conscious and the unconscious. I wish I could say I enjoyed it, but I woke up in shock. I'm still bothered just thinking about it.

Rebecca says: This sounds like some false awakenings I've had as a lucid dreamer. They are SO REAL  - a phrase that is often overused when we describe vivid and lucid dreams but in this case it is actually an understatement...

I think only lucid dreamers have these kind of intensified false awakenings, and I believe you were semi-lucid because you DID stop to ask yourself if you were dreaming. Yet you logically refuted it because of the lifelike level of detail (in essence, this was your failed reality check).

So you were lodged in a unique state of false awakening, unable to become fully lucid yet parts of your conscious brain were activated as they would normally when you wake up for real.

But this isn't a "normal" state of dreaming, I'm fairly sure it is an anomaly in the brain, far stranger than most typical lucid dreams (and that's saying something!) And as you know, false awakenings tend to happen more when you lucid dream - but this is a special kind which is especially exciting (or shocking).

One solution is to habitually perform foolproof reality checks when you wake up (rather than arguing with yourself, which is unreliable because the dreaming mind doesn't argue so rationally anyway...).

This will free you from the confusion and allow you to explore the false awakening in more detail, as a lucid mind.

I have used these vivid false awakenings to become lucid and after that point of acceptance, the dream can become just as surreal as any other. It is no longer bent on mimicking your real world to the point you can't believe the woman simply was never there... Fun stuff.

I'm sure you'll remember this dream vividly for many years, and though it shocked and scared you initially for its ability to mimic reality, this just reveals how powerful the mind can be.

You are not crazy. I think you'll come to be in awe of this experience and relish the time it happens to you again...

If you came here wondering about dreams that feel real - then I strongly recommend you stop by and learn how to control your dreams.