A Review of Paranormality by Professor Richard Wiseman 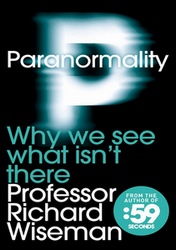 Following in the footsteps of America's awesome James Randi and Britain's brilliant Derren Brown, Professor Richard Wiseman is a compelling psychologist and former conjurer who uses his knowledge of parapsychology and stage show magic to debunk popular paranormal myths.

If you are a devout believer in the paranormal, please don't scream and drop this book as if it had just burst into flames. Paranormality: Why We See What Isn't There was specifically written for you.

The most fascinating things I found in this book include:

What's It All About?

I bought Paranormality for a psychology lesson into the idiosyncrasies of the human mind. This was certainly true on the fascinating topics of Out of Body Experiences (OBEs), cold reading, and how cult leaders appear to achieve mind control over their followers (and even convince them to kill themselves). The rest of the book was dedicated to debunking irrational beliefs in things like Ouija boards, palm reading, astrology, psychokenesis, ghosts and precognitive dreams.

Discovering Wiseman's secrets is rather like listening to a magician telling you how all his tricks are done. Yet we're not talking about magic; we're talking about our personal and very precious beliefs about the world around us. It may be painful to do so, especially if you have been locked in a certain mindset for a long time, but I do think it's our responsibility as truth-seekers to peek behind the curtain and learn what it's all about - rather than accept such "tricks" at face value. The end result is, by defintion, enlightening.

Blowing Away The Psychic Fog

Professor Wiseman approaches this task with humility and respect. He delivers an important message at a time when people are obsessing over how the world is going to end in 2012, how to become rich with the Law of Attraction, and how to make contact with their deceased loved ones via self-proclaimed psychics. Wiseman urges us to lift the veil of deceit and stop falling for centuries-old charlatan tricks.

Yet the tone of this book is not patronizing. Wiseman delivers his psychological studies and first-hand experience of performing magic in a respectful and unbiased manner. You get the feeling he is a sensitive chap who, despite explaining how all psychics are conning you (and/or themselves), he doesn't want to ruffle any feathers. Or perhaps that's just the most effective way to get your message across. He is a psychologist after all.

A Spot on Dream Control

Another thing that attracted me to Paranormality was for Wiseman's take on dream control - aka lucid dreaming. I'm still a bit confounded over how this topic still falls into the category of "paranormal" in so many books and websites today. Paranormal is literally defined as experiences which fall outside of scientific explanation. And yet Wiseman himself details how the first lucid dream was scientifically recorded by Keith Hearne in the 1970s. Nevertheless, if people want to talk about lucid dreaming in their book of psychological oddities, I'm not going to be the one to stop them.

The concept of dream control gets a few mentions in this book but it's fairly basic stuff designed for the totally uninitiated. Among other things, for example, Wiseman recommends you set your alarm clock to wake you up during your most likely periods of REM sleep. He also suggests that when you do become lucid, look in a mirror - "in a lucid dream your image will appear blurry" - which unfortunately is not entirely accurate for many people (unless you succumb to the power of suggestion in which case it will be now). After that, he recommends you bite your arm or lean against a wall: perfectly acceptable reality checks for cannibals and loiterers which I can certainly endorse.

So while there aren't any major new dream control revelations here, I'd like to say kudos to Richard Wiseman for drawing lucid dreaming closer to the public eye.

In its essence, Paranormality is not just a logic bomb for the New Agers and Spiritualists of this world. It's a fun page-turner with loads of interesting stories and psychological tidbits you can show off to your friends. Wiseman finishes the book with a bonus chapter called The Instant Superhero Kit, which provides several mind-bending tricks you can perform at parties. And I think that really defines the tone of this book - for it is, ultimately, aimed at mostly casual readers with a short attention span. Given Wiseman's goal - to make basic psychology and paranormal understanding as accessible as possible - this approach seems entirely justified.

Richard Wiseman is a well-recognized face in Britain and frequently quoted in the media for his insight into deception, luck and the paranormal. It's his job to popularize modern psychology findings and educate the masses on being rational. He's also a thoroughly fascinating chap with a talent for converting the mysterious into more readily digestible truths. I recommend Paranormality for anyone who wants to face some such home truths about their own reality.

"People are emotionally drawn to the supernatural. They actively want weird, spooky things to be true... Wiseman shows us a higher joy as he deftly skewers the paranormal charlatans, blows away the psychic fog and lets in the clear light of reason." ~ Richard Dawkins