Scientists Measure Dream Content with The Help of Lucid Dreamers 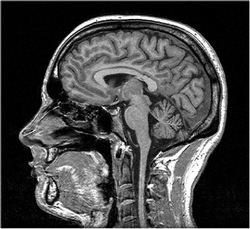 How we laughed at this year's April Fools joke - a machine that monitors and records your dreams. And yet, a group of European scientists have begun to crack the code that will actually make such a reality possible. Could you one day be able to record and playback your lucid dreams? These scientists are already laying the groundwork...

Sleeping in the lab, the lucid dreamers were told to signal the moment they became lucid (through the classic method of eye movement signals). They were also asked to consciously clench their right dream fist for 10 seconds, then their left one.

At the same time, functional magnetic resonance imaging scans enabled the researchers to gain a live view on what goes on in the brain during this lucid action.

Interestingly, the same areas of the brain were also active when the lucid dreamers clenched their fists in real life - or even simply imagined doing so.

The scientists now have a basis for translating specific brain signals into both physical and dream actions. In time, they can build up whole a database of signals and their meanings - ie what's happening in your dream at any given moment.

"With this combination of sleep EEGs, imaging methods and lucid dreamers, we can measure not only simple movements during sleep but also the activity patterns in the brain during visual dream perceptions," explains Martin Dresler, a researcher at the Max Planck Institute for Psychiatry.

This means that it will soon be possible to interpret and record your dreams just by having your brain scanned while you sleep. But how will dream playback occur?

A separate team of researchers at UC Berkeley are already on the case...

It turns out this brain-scanning-your-thoughts idea is a hot area of research. Scientists are UC Berkeley have been scanning the blood flow in their own brains in an MRI machine while watching Hollywood movies.

They fed the data into a computer program which matched up brain activity with motion picture information. Soon, the computer had built up an enormous “rule book” of brain activity which it could use to decode what the brain was actually seeing.

This team went one massive step further than the European experiment. They put 18 million seconds of random YouTube clips into the computer to give it a "paint palette" to work from. Then, using some remarkable programming, the computer pieced together videos of its own creation, aiming to replicate what the subjects were seeing from within the MRI machine.

Here's the result: on the left you'll see the movie clip being watched by the person. On the right, you'll see the computer's attempt to reconstruct the clip from a library of YouTube images - based only on information about brain activity and blood flow.

Of course, both experiments offer tantalizing leads into the future realm of mind reading and mind recording. If a portable brain scanning device were to be developed (as opposed to sitting in an MRI machine) people all over the world could record their lucid dreams, design video games with their imagination, and even share their live perceptions with other people, a concept explored in the movie Being John Malcovich.

Other applications of its offspring technology might include telepathic video calls and using mind control to drive your car or operate your computer… Fascinating stuff.