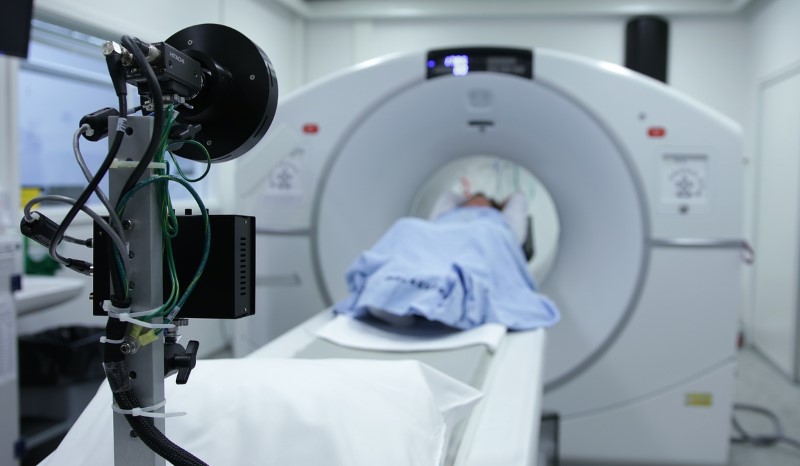 Wondering about the activation synthesis model of dreaming?

Simply put, it’s a neurobiological explanation of why we dream.

This means it attempts to explain the reason that humans dream by looking at what occurs physically within the depths of the brain.

It was conjured up by esteemed scientists Allan Hobson and Robert McCarley way back in 1977.

For those of you interested, you can read the full beefy hypothesis here.

The history of the theory

The theory is best understood from a historical perspective. Bear in mind that REM sleep itself was only discovered in 1953. The activation synthesis theory was born out of follow-on research that used ground-breaking (at the time) imaging equipment to recognize that the brain stem was physically activated during REM sleep.

After realising that brain stem activation levels were different between waking and REM sleep, Hobson was quick to jump in with his postulation that this difference in physical activity could explain dreaming!

When first published, this model was actually subject to much furore and outcry...

It was the first theory to provide a “physical”, “scientific” explanation for why we dream.

He was essentially ‘sticking it’ to the Freudian dream analysis community, who had long maintained the significance of the hidden (and unhidden) meaning behind dreams.

This new ‘scientific revelation’ basically put forward that dreams are nothing more than a random firing of neurons - so you can imagine how happy the Freudians were!

So how does the activation synthesis hypothesis explain dreaming?

The theory, essentially, is quite basic and simple. 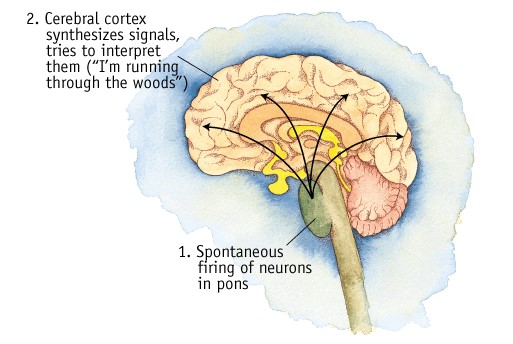 As suggested by its name, it’s made up of two parts: activation and synthesis.

Activation refers to the random firing of neurons from the brain stem. And the synthesis refers to the interpretation of these random signals into spontaneous thoughts by the cerebral cortex

In other words, during REM sleep, random waves of neurons are sent up from the brain stem and get synthesised into higher level information such as visual images and sounds - creating dreams.

Development of the model – The AIM Model

If the activation synthesis theory seems a bit basic, that’s because it is (or was).

Remember, it’s best seen as a point in time (1977) when it was actually considered quite revolutionary!

However, over the years technological advances in brain imaging – particularly PET scanning - allowed researchers to examine the neurobiological workings of the brain in greater detail.

And this allowed Hobson to develop his theory in more detail.

In 1990, he published his paper Activation, input source, and modulation: A neurocognitive model of the state of the brain-mind.

This became known as the AIM model and was a significant elaboration of the original theory. It looks at the overall electrical and neurochemical makeup of the brain and attempts to explain states of waking and non-waking consciousness in neurobiological terms.

That’s right, it extends far beyond merely explaining dreaming and looks at the entire body-mind connection and model of consciousness. 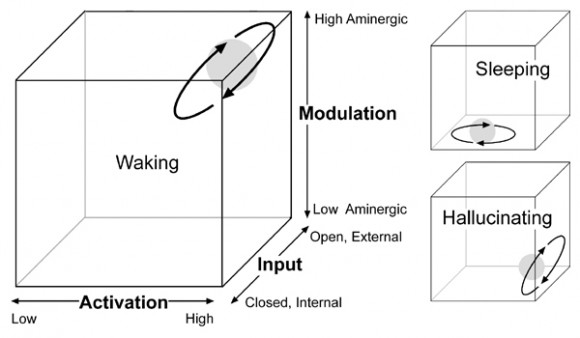 Nevertheless it is still quite a basic model... attempting to understand the brain in a very simple mechanistic fashion that consists of “REM Off” and “REM On” cells.

As such, AIM still raises more questions that it does answers!

It should however be respected as an important theory that has helped the scientific community to slowly advance toward a greater neurobiological understanding of the human brain.

Strengths of the activation synthesis model

As with any theory, it is just that, a theory. So let’s look at some of the strengths and weaknesses.

It does accounts for the inherent bizarreness of dreams by assigning this to ‘randomness’.

In the absence of a fuller understanding, many still cling onto this theory in lieu of a better explanation.

However, chiefly it deserves praise for being the first research to highlight the role of different areas of the brain in the phenomena of dreaming and paving the way for modern research that has followed.

Criticisms of the activation-synthesis hypothesis

Both the original activation-synthesis theory and the AIM model have been heavily criticised and are widely regarded as being extremely limited.

You can read an in-depth analysis on page 37 of this interesting paper.

The biggest criticism of activation synthesis (and that AIM doesn’t address either) is that dreams don’t just occur during REM sleep.

While in the early days this was thought to be the case, it has been disproven many times in different studies.

Dreams occur in REM and NREM sleep. This was replicated most recently by Suzuki 2004 who looked at 735 different dream reports.

So purely from that sense, the model doesn’t hold water.

Also importantly, neither activation-synthesis nor AIM actually provide any explanation for why we dream.

They simply assert that high-level physical activity in the brain ‘causes’ dreaming. But they don’t address why the brain would do this.

The human mind is a highly evolved, highly complex living network and to assume that its inner workings are simply ‘random’ just highlights our lack of understanding of this activity.

But most importantly of all - there’s no direct empirical evidence to support this theory!

And don't forget: some dreams can and do have a deeper meaning, with personal significance. The activation-synthesis model provides no explanation of how or why this could be the case.

Any article on activation synthesis has to acknowledge that Hobson is the most respected dream researcher in the world. He has been working tirelessly in the domain for over 50 years and has published some of the most interesting research in the area.

Don't forget that he has done more than anyone else to advance our scientific understanding of dreaming.

Nevertheless, as of 2018, the human species has yet to reach a full understand of why or how we dream!

So - when considering the activation synthesis hypothesis - consider it as a limited neurobiological explanation of dreaming that has helped advance further research, but is itself subject to a number of key flaws.