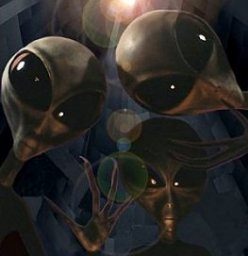 Are alien abductions real? New research confirms there are some major similarities between these reports and those of sleep paralysis.

Indeed, these hallucinogenic nightmares may even be classified as type of dark lucid dreams.

To the uninitiated this may sound like an odd claim, but those who are familiar with sleep paralysis and the nature of lucidity can draw some compelling connections.

So if you believe you are the subject of an alien abduction (or similar experience involving any kind of night-time visitation by demons, shadow people, ghosts and ghouls) take heart that your terrifying experience may all have been a cruel trick of the mind...

A History of Alien Abduction

The phenomenon of alien abduction has been around for over half a century - with the first famous report originating in 1957.

Never before in history did anyone talk about slender aliens (by the way, is there any such thing as aliens?) with big heads stealing us away in our sleep... until the phenomenon was first reported in the mainstream media and the idea got into our heads.

The timing, of course, coincided with The Space Race and Yuri Gagarin's landmark achievement of becoming the first human in space. The media excitement probably helped fuel the ongoing sci-fi literature boom.

Indeed, it was science fiction that gave us the first example of alien abduction. In 1946, Planet Comics published a strip in which aliens used a luminous tractor beam to kidnap a female earthling they called Specimen 9.

These alone are not good enough reasons to dismiss the claims of alien abductees. But should we really be surprised that, now lodged in the cultural consciousness, life began to imitate art...?

What Are The Odds?

According to studies, millions of Americans believe they have been abducted in their beds at night. Why so many? Do aliens really have an insatiable need to probe our puny human bodies so much? Biologically, we're all members of the same species so what's with the need for 1,000,000+ separate abductions?

The numbers just don't add up. I'm not saying millions of people are lying about the whole thing. I believe their experiences are real - at least, real for them.

The real reason millions of people feel they have been visited by aliens is because there is something fundamental in human nature causing this experience. 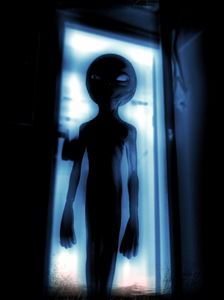 Many sleep researchers believe that night-time abductions are a culmination of natural physiological and psychological processes of the human body. In other words, it's a freaky deaky mind trick.

Alien abductees are not crazy, delusional, nor insane. They're the victims of cultural influence (the way horror movies infect your nightmares) combined with a common sleep disorder called sleep paralysis.

Every night, we all enter a bodily state of REM atonia - where our muscles become unresponsive to the firing of motor neurons in the brain. This safety mechanism prevents us from acting out our dreams.

The few parts of the body which remain untouched by REM atonia are the eyeballs (hence, Rapid Eye Movement), chest (so you can breathe normally) and perhaps some extremities like fingertips and lips.

Sometimes, on the verge of sleep or when you are stirring from a slumber, you can mentally awaken and become aware of the REM atonia before it wears off. It's a slight disconnect between brain and body - and while not dangerous, the results can be extremely disturbing if you don't understand what's happening.

Some people experience this every single night; others will never experience it in their entire lives. Being awake during REM atonia is known as sleep paralysis and the likelihood of it happening is thought to increase when you suffer from narcolepsy, sleep deprivation or jet lag.

If you wake up in the night and are unable to move, what happens? Most people tend to panic. The harder they try to move their arms and legs, the more obvious it becomes that something is blocking their will to move.

It can feel like a lead weight holding your body down and your chest may feel like it is being crushed. (It isn't, of course, but the feeling of paralysis can be so alien in itself you become wholly focused on that restricted movement.)

Sleep paralysis can last anywhere from a few seconds to a few minutes, and while not dangerous, it can be extremely mentally disturbing.

But where do the aliens come in?

As if the experience of sleep paralysis wasn't disturbing enough, your mind (in a state of panic and confusion) can take it to whole new levels of horror.

Sleep paralysis is a sleep disorder, occurring only on the sleep-wake border. This is also the realm of hypnagogic hallucinations and dreams.

Fueled by the bizarre circumstances of waking up paralyzed, your half-asleep mind may try to make sense of the experience by creating nightmarish hallucinations to "explain" what's happening. Like dreams, these explanations are drawn from our unconscious beliefs about reality - including religious and cultural interpretations.

In the 18th century, Germanic folklore and personal experience led John Henry Fuseli to paint The Nightmare, featuring a woman in sleep paralysis. Like many reports of the time, her chest was compressed by an incubus (male sex demon) while the head of a horse (mare) looked on with ghoulish, featureless eyes... 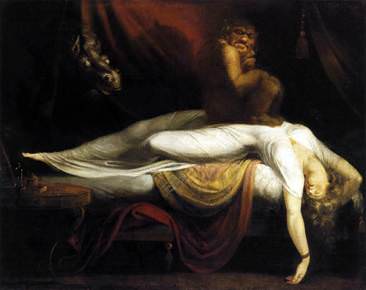 The experience of hallucinations during sleep paralysis is so old, in fact, that even the original meaning of the word "nightmare" relates to this phenomenon. Nightmare is derived from mara, a Scandinavian mythological term referring to a spirit sent to torment or suffocate sleepers by pressing weight on their chests.

As our science and literature developed over the ages, so did our cultural beliefs. In the Western world, we're not so much enslaved by the idea of sexual demons as we are extra terrestrials and pan-dimensional beings. It doesn't take a giant leap of the imagination to go from incubus attacks to alien ones.

The blueprint is already there. Many alien abduction reports share the same features, which you can now relate to a typical experience of sleep paralysis:

If you enter a dream from a half-awake, half-asleep alien abduction experience, it will likely follow the thread of being taken aboard a spaceship. You may go on to dream vividly about floating out your bedroom window, aboard a ship, and being prodded and probed - just as science fiction has taught us to expect. As with lucid dreaming, the course of this semi-conscious dream is largely directed by your expectations.

And So To Lucid Dreams...

How, then, do alien abductions and sleep paralysis relate to lucid dreams?

It was Dr Stephen LaBerge, a leading lucid dream researcher, who famously pointed out that sleep paralysis is not something to be feared... but to be encouraged and embraced and used as a stepping stone to the world of lucid dreams.

The main reason sleep paralysis is so scary is because people don't understand what's happening. They may think they are dying, passing into the afterlife, going to hell - and, yep, even being abducted by aliens.

Now that you know the biological explanation of sleep paralysis, is it really as scary? You are primed with knowledge that, while the paralysis is genuine, it is a safe and natural mechanism created to protect your dream sleep. And while any hallucinations may be disturbing, they are no more real than a vivid nightmare.

What's more, you can control the outcome of these hallucinations, much like a lucid dreamer controls the outcome of his dreams. Instead of allowing fear to take over your thoughts, flood your mind with warm and positive emotions like love and happiness. Sounds cheesy? Absolutely. But it will stop the intruder in its tracks. If you then imagine entering a beautiful dreamscape like a beach or mountain top, you will suddenly arrive there, all the while convert your experience into a vivid lucid dream. No complaints there.

As explorers of the sleep-wake border, we are more prone to encountering sleep paralysis from time to time. This is not a bad thing! As experts point out, your beliefs and attitudes to sleep paralysis directly affect the outcome.

Bring your fear along and it will predictably turn into your worst nightmare. Bring peace and courage, and you can turn it into amazing lucid dreams and unimaginable states of bliss.

This, too, can apply to the alien abduction experience... 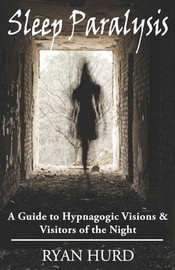 If you suffer from sleep paralysis or are worried about this happening to you, check out Ryan Hurd's Sleep Paralysis: A Guide to Hypnagogic Visions and Visitors of the Night.

Ryan's sleep paralysis guide also contains valuable insights for anyone who wants to have frequent lucid dreams and out of body experiences.