Home >
Advanced Lucid Dreaming
> How to Optimize Your Brain Chemistry

How to Optimize Your Brain Chemistry for More Lucid Dreams

This article sums up how to optimize your brain chemistry for more lucid dreams - and how to use the sun to avoid the number one mistake in OBEs.

The #1 Biggest Mistake Almost Everyone Makes

Here's a mistake I see almost everybody make. This is not their fault since most of the books on OBEs are actually telling them to make this mistake.

People often ask for advice on forums about how to induce OBEs. The posts often start out saying: "Last night I went to bed to do an OBE."

Here they've actually already made the cardinal OBE mistake. The mistake is: don't do your OBE attempts at night. Do them in the early morning.

Optimal Brain Chemistry is All About Timing

The optimal time to attempt an OBE or WILD is dependent on your brain chemistry and your circadian rhythms.

I've had literally thousands of OBEs in the early morning. I've had fewer than ten at night.

The two main chemicals involved are called serotonin and melatonin:

Melatonin breaks down under light. This creates the melatonin circadian rhythm.

At night time you have very little melatonin. It starts increasing around dusk and peaks around 2-4am. It then breaks down again at dawn. 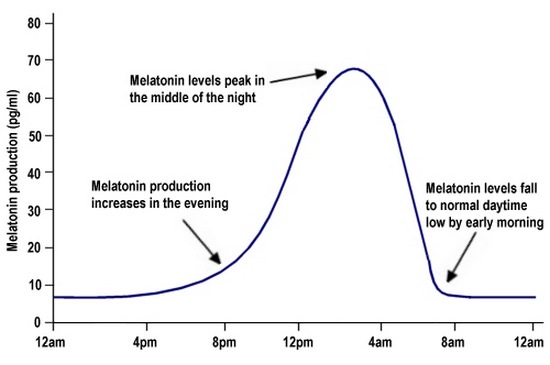 The other secret ingredient is the 'fight or flight' hormone called cortisol. Cortisol is depleted throughout the day but then surges back in the early morning in preparation to wake you up.

The interplay between cortisol and melatonin creates THE ideal sweet spot for OBEs in the early morning.

The Circadian Sweet Spot is 4am-5:30am

During the sweet spot, relaxation is easy because of relatively high melatonin levels. You've also been relaxed for several hours during sleep.

Alertness is easy because cortisol brings with it a rush of two other stimulants called epinephrine and norepinephrin. These stimulants are meant to help wake you up but you can use them for dream alertness instead.

...And The Worst Time For OBEs?

Bedtime is the single worst time of all for OBEs because your brain chemistry is geared for the opposite of lucidity at that point. It's geared for zonking out which is what always happens in the questions I see in forums.

At bedtime you're low on cortisol and melatonin. By the time you've relaxed enough to fall asleep your cortisol levels are so low you have virtually no chance of regaining lucidity.

Wake Back To Bed (WBTB)

In fact if there was only one method I could use, this is the one. It's called Wake Back To Bed and was invented by former NASA engineer Dr Albert Taylor.

How to Use The Circadian Sweet Spot

Here's how Wake Back To Bed works.

Get up in the early morning during the OBE sweet spot, stay awake for a period of time then go back to sleep.

Use the sleep paralysis methods covered earlier and you'll likely have spontaneous OBEs and lucid dreams.

Why Wake Back To Bed Rocks The Hizzouse

The reason Wake Back To Bed works so well is because of the fundamental theorem of sleep paralysis. If you wake up and fall asleep in the early morning you're pretty much begging for sleep paralysis and spontaneous lucid dreams.

In fact, before I knew anything about OBEs I used to have waking paralysis episodes all the time and didn't know why. It was really irritating to wake up and not be able to move. I later realized it was because I was not sleeping well and was waking up for a few minutes and then going back to sleep without moving.

That caused the paralysis and it's the basis for pretty much all our other induction tricks.

So how do you improve on Wake Back To Bed? The immediate answer is to tweak the amount of time you stay awake before going to sleep again.

Tweaking The Time You Stay Up

Both approaches work well but which should you use?

Going right back to sleep without moving makes it very easy to fall asleep again. However it's very likely that you'll fall completely asleep and not become lucid. Even so, this is the method I use most because it requires no planning or effort.

With option 2, where you get up from bed for a while, it's harder to fall asleep again. However it is very likely that you will become lucid if you do sleep. Research by Dr Stephen LaBerge has shown getting up for an hour before going back to bed significantly increases lucidity.

My personal experience - and most of the people I've advised - suggests 45 minutes works a slightly better than an hour.

Several people who were not able to have success by staying up for an hour were able to have OBEs simply by changing the wakefulness period to 45 minutes. Waiting until you start yawning again is a good rule of thumb.

The amount of sun you get has a giant impact on your ability to have OBEs because your body needs sun in order to make serotonin. Get at least an hour of outside sunlight at day break and sundown. Those are the best times to get sunlight without risk of a sunburn because the sun is so low in the sky.

One Hour of Gradual Darkness Before Bed Slays Insomnia

At night, make sure to turn the lights down at least an hour or so before going to bed.

The body is not evolved for the abrupt light-to-dark change that you get with artificial lighting.

By turning the lights down gradually, you'll simulate sunset and greatly reduce and chance of insomnia.

Nick Newport is the author of Lucidology, a website that teaches how to have lucid dreams and out of body experiences from a waking state.