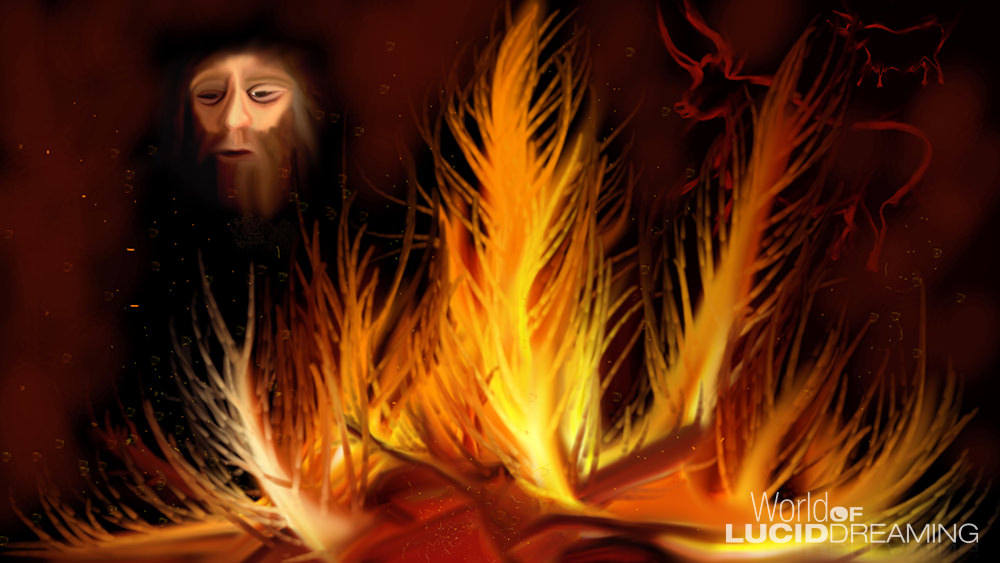 In waking life, I'm writing a story. The opening scene features a cavewoman giving birth. As part of the writing process I visualized it in detail - and in doing so I accidentally incubated this spooky but oddly touching lucid dream.

In the dream, it is night time. I am part of a small tribe that lives in a cave system set in the mountains. By night it gets extremely cold and so we move into the caves and lay on animal skins to keep warm.

I know that life is hard for us. A fire is already burning in the central cave.

One of the other tribesmen is a sad-looking hunter. He is grieving for something, but he remains silent so I don't understand what's really wrong.

As we sit around the glowing fire it spontaneously occurs to me I'm dreaming and I become lucid. Suddenly my mood changes and I'm happy, but I stay with this gloomy caveman to see if I can probe his mind.

I then got the instinctive feeling he thought sadness was like a physical thing trapped in his body, inhabiting him.

I started to explain that he was not actually possessed by sadness, but as I spoke he moved away from me; he didn't want to hear it. I was trying to teach him a modern day view but he was incapable of seeing it any other way.

I (too quickly) gave up on the caveman and left the system to explore the desert outside. It had turned into daylight with lush fields that sprang with exotic pre-historic flowers.

When I later woke up, the image of the caveman stuck with me. I wish I had spent more time with him and tried to lift him out of that darkness.

RELATED: How to Digitally Paint Your Lucid Dreams