The five common characteristics of dreams, defined by dream researcher J Allan Hobson. Plus, Hobson's biological theory of dreams and their real meanings.

Through his extensive dream research spanning three decades, Hobson emphasizes the role of neurochemicals in the brain and random electrical impulses originating in the brainstem. He does not say that dreams are purely the random firing of neurons - but rather the brain's cobbled attempt at making sense of them.

He later acknowledged the increased activity of the limbic system (a primeval part of the brain which produces emotions) during REM sleep. This served to give the meaning of dreams an emotional basis, rather than a random neurochemical one.

So, does this provide us with any psychological basis for dream interpretation? Was Sigmund Freud right to suggest that dreams symbolize our repressed fears and desires? Do our dreams contain our darkest secrets just waiting to be unlocked?

Actually, Hobson believes Freud had it wrong. He may even have impeded our scientific understanding of the nature of dreams by propagating such ominous theories. Hobson is all for a psychological meaning to dreams, but just that it needn't be locked away under layers of secretive unconscious meaning.

Instead, Hobson takes a Jungian approach: dreams reveal far more than they hide - and can actually be highly transparent. However, it's difficult to link this conclusion to Hobson's biological explanation for dreaming.

But the theory does make sense. Next time you dream of being chased, isn't it likely that you are - metaphorically - running away from something in real life that's causing you anxiety? And if you dream of being pregnant - for a woman at least - is this a natural expression of your desire to have babies?

With simple interpretive analysis, dreams may not be so mysterious after all... 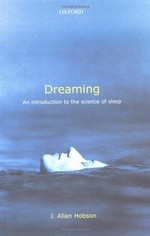 To learn more about J Allan Hobson's theories of dreaming, check out Dreaming: An Introduction to the Science of Sleep. This book describes how the evolution of dream theory has advanced dramatically over the past 50 years. See how dreams have specific perceptual, cognitive, and emotional qualities that set them apart from waking consciousness (loss of awareness of self, loss of orientation, loss of directed thought, reduction in logical reasoning, and poor memory) that correspond to specific modes of brain activity.