Home >
Dream Control
> How To Free Your Mind in Lucid Dreams: The Jump Program

How To Free Your Mind in Lucid Dreams: The Jump Program

Remember this scene from The Matrix?

In the Jump program, Morpheus teaches Neo how to free his mind.

Performing impossible feats in the lucid dreamworld, too, demands this kind of mental reconditioning.

In fact, the mindset is virtually identical...

Early on in his training, Morpheus teaches Neo how it's not his muscles inside the computer-simulated world that makes him stronger or faster. It's his mind.

And so we teleport to the top of a skyscraper, where Morpheus and Neo are standing, both fully aware that their environment is not real.

Just as we are in a lucid dream.

How many times have you done this in a lucid dream before?

It takes guts, I can tell you. If you're only semi-lucid (and sometimes that can be hard to gauge until it's too late) then your unconscious will be whispering in your ear at this point: you're going to fall.

Naturally. Because that's what gravity tells us continuously in waking everyday life. We can't jump from rooftop to rooftop like that.

And when we try to do so in a lucid dream -- it's happened to the best of us -- the next thing we know, we're in freefall.

Sometimes you can catch yourself. A quick flash of insight gives you the confidence to rebel against the impending splat. And up you go again.

Other times, the fear has already set in too far -- and the expectation of hitting the ground becomes self-fulfilling. It's not like we want to hit the ground, but like Morpheus teaches: you can't think you'll make the jump. You can't hope you'll make it. You have to know you will.

I Believe I Can Fly?

R Kelly had it wrong. Simply believing is far too wishy-washy. In a lucid dream, you need to do more than believe. You need to know.

"Of course I can make the jump! I'm lucid dreaming!" 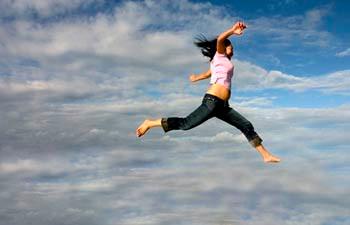 It takes this confidence of knowledge - a fully lucid mind - a mind that is truly free inside the dreamstate - to consciously create and fulfill impossible tasks like flying high, jumping across skyscrapers, soaring into space and exploding ourselves into a million little pieces (hey, why not?)

Don't get me wrong, we've all had fuzzy semi-lucid and non-lucid flying dreams. But it's only when we're fully lucid that the experience is richly detailed and lifelike. In this state, a controlled mindset is critical, because this is where the self-doubt creeps in; where knowledge carried over from waking reality tries to apply itself to the dreamworld and ruin all your best efforts. It's a unique state of awareness in which we understand that our reality is not real.

Quite remarkably, the Wachowskis, who are both lucid dreamers themselves, convey essential lucidity lessons like this throughout the movie which, let's not forget, is about manipulating a computer simulation.

And yet it almost* exactly applies to the lucid dream environment.

The two concepts overlap so well, in fact, that the movie may as well have been based on the human race being trapped inside a lifelong mutual dream. A dream where only a handful of people, including Morpheus, Neo and Trinity, had learned to become permanently lucid within it.

*Why almost? The Matrix teaches us that if you die inside the Matrix, you die in real life. The mind cannot live without the body. Of course, this is movie drama, and in lucid dreams, you can happily die and live to tell the tale!

The Philosophy of The Matrix

According to the official Matrix website, Andy and Lana Wachowski drew on a whole host of philosophies to devise the plot, including Descartes, Mahayana Buddhism and the proverbial Brain in a Vat argument.

It's the brain-in-a-vat conundrum that kicks off Neo's burning question: "How do I know that my present reality is not an illusion?"

And this, too, is how we kick off a lucid dream.

The Brain in a Vat: A Thought Experiment 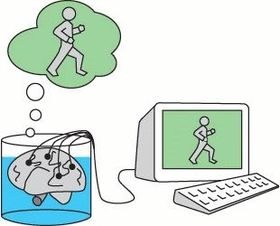 In philosophy, the brain in a vat is a thought experiment designed to question our ideas of knowledge, reality, truth, mind and meaning.

Imagine a mad scientist has removed your brain from your body, suspended it in a vat of life-sustaining liquid, and connected its neurons to a supercomputer which provides it with electrical impulses identical to those the brain normally receives. The computer then simulates reality and your disembodied brain continues to have perfectly normal conscious experiences without any relation to the real world.

This raises a number of considerations: 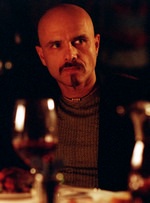 In The Matrix, Morpheus reveals that our brains do exist in vats, quite literally. To which Cypher reacts: "If you'd told us the truth, we would've told you to shove that red pill right up your ass."

It's a good point he makes. If you were a brain in a vat, would you want to know? Every experience, every belief, every person you ever loved, would turn out a complete fiction. And what's on the outside of the vat, anyway - is it a better quality of life than you have here? Or does the simple truth that your life is a simulation - regardless of whether you know it - invalidate your existence anyway? Would you choose a life in Zion only because it's real?

The Wachowskis suggest that, like Neo questioning the nature of his reality, the simple wondering that you might be dreaming is not enough. Neo possessed this knowledge from the start, and yet he still wasn't able to control the Matrix.

"Have you ever had a dream, Neo, that you were so sure was real? What if you were unable to wake from that dream? How would you know the difference between the dream world and the real world?"

We must go further - with the critical thinking reality check. This is one of the most fundamental ways in which we being our lucidity training.

To heighten our lucidity further, we must train our minds in our own lucid dojos before we can become fully conscious of our surroundings. We learn to understand the nature of our separate waking and dream realities on a profound level, in order to achieve full creative action in our simulated worlds.

Like Neo, many newbie lucid dreamers have difficulty passing Morpheus' Jump program until they have been through their own personal training regime.

Fortunately, the learning curve is steep.

"Do not try and bend the spoon. That's impossible. Instead... only try to realize the truth... There is no spoon... Then you'll see, that it is not the spoon that bends, it is only yourself."

We can all be as proficient as The One: capable of learning in just a handful of quality lucid dreams, the mental perspective required to understand what makes extraordinary jumps possible in a non-physical lucid dream world.

The Matrix is littered with references to attaining this mindset, making it a veritable instruction manual for lucid dreamers. Go. Watch. Dream...

"You have to let it all go, Neo. Fear, doubt, and disbelief. Free your mind."