How to Stop Nightmares with Role Playing and Lucid Dreams

If you're a lucid dreamer, you probably already know that becoming lucid is a powerful way to deal with nightmares. Now, in a 2015 study, researchers have validated this theory by teaching nightmare sufferers how to lucid dream - with significant findings.

Over a period of 10 weeks, 12 out of 16 (75%) were able to learn to dream lucidly. This supports the idea that lucid dreaming is a learnable skill and accessible to the general population.

Both groups kept dream diaries throughout the experiment, as well as reporting on their sleep quality via questionnaires at 5, 10 and 12 weeks.

The result? Both groups reported significantly fewer nightmares at the three-month follow-up. However, the group who learned lucid dreaming reported a reduction in nightmares that was both sooner and higher... 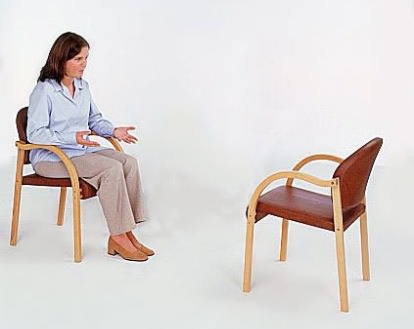 In Gestalt therapy sessions, the dreamers were encouraged to describe and confront their nightmares by role playing the main characters and images with the two-chair technique.

Gestalt therapy is successful in treating nightmares because it helps to:

The addition of lucid dream training to the study had a noticeable impact. Though both groups reported fewer nightmares after three months of treatment, the lucid dreamers were reporting results before the Gestalt therapy had concluded at 10 weeks.

Here's what the researchers did for the group who learned lucid dreaming:

Other Effects of Gestalt Therapy and Lucid Dreams

Interestingly, the 12 people who were exposed to both Gestalt therapy and successfully learned to lucid dream during the study reported improved sleep quality to a statistically significant degree.

Though it's still a small sample, it does lend credence to the idea that lucid dreaming, besides stopping nightmares, can also provide a better night's sleep.

Another finding was that lucid dreamers got much better that remembering their dreams after 5 weeks, while those in the Gestalt therapy only groups found no difference on their dream recall.

Jenny Casale is a teacher with a passion for learning - about everything. She is a grandmother of two and lives in New Zealand.