How To Think Creatively

We are all creative. It's how we change the world. Creative thinking is what separates humans from all other animals. You might call it being in the zone or thinking outside the box. It's a way of thinking that allows you to create and invent new concepts - such as art, technology, literature, music, experiments or philosophies. 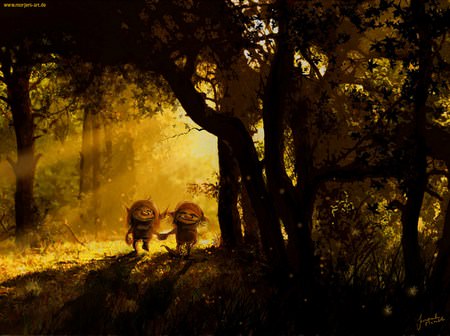 Hand in Hand by Jeremiah Morelli

My primary creative outlet is writing. As a teenager I wrote short stories and poems. Later I worked as a financial journalist and wrote investment articles. Nowadays I channel my words into my websites. I have always felt the need to make sense of things and write them down, to help elucidate the world for others. It's my way of expressing myself.

Creativity doesn't have to be limited to literature or the arts. You may experience your greatest creative moments during computer programming, for example. It can be a right-brained or a left-brained process and can show up in many forms, such as:

It doesn't matter what your primary outlet is - as long as you tap into it on a regular basis. Otherwise you are squandering the very thing that makes you human.

Creative thinking is a surprisingly automatic process, often surpassing the need for judgment or analytical thinking and allowing gut instinct to take the lead. My best articles arise from me sitting at the computer focused and tapping away and paying no attention to the outside world. I could, in a sense, be sleepwalking. I don't stop to think and ponder every sentence before I write it down - I just type and it pours out onto the screen. I completely forget about my dogs who are sniffing and wuffling and playing at my feet.

Being in this state of mind is exhausting but also exhilarating. I believe it's our life purpose to experience the world and translate it into our own creations, which then go on to mould other people's experiences and better their creations. So creative thinking is an essential part of living and helps fulfill your life purpose.

How To Think Creatively

Here are three reliable ways to enter and maintain a state of creative thinking when inspiration strikes you:

By hitting a nerve, you can tap into the thing that motivates you the most to develop your idea or creation. Why are you doing this? What's your reward?

I'm motivated by the idea of spreading ideas and changing the way people feel. Hopefully for the better. Today I was inspired by the idea that we are all creators - and this is how humanity evolves. It may happen slowly or rapidly, accidentally or deliberately. So by encouraging others to think creatively, I can, in my own small way, help humanity evolve faster. We all can, when we share our creativity. Like dropping a single pebble into a pond, you create ripples.

Perhaps you can create a piece of music that will make someone's heart sing? Or paint a picture that makes them want to become an artist? Or tell a joke that makes them laugh? You can use your creativity to make the world a better place. That's pretty good motivation on its own.

Distractions are annoying and hinder the creative thinking process. If I have to stop to answer the phone or think about what I'm making for dinner - my train of thought is lost. I may be able to pick it up again but it wont be from exactly the same point. That particular line of thought may be lost forever. So while you're in the zone, avoid distractions - especially talking to other people or thinking about non-related things.

There is an exception to this rule - but it's more of a timed distraction. It involves switching between your right and left brain to allow for a different type of creative input. Sometimes when I have been at the computer for hours I literally run out of steam. I lose the ability to concentrate and need a break. But I don't want to leave the zone, so I do something that allows my left-hand brain to rest while my right-brain stays focused on the task at hand.

I take a shower or clean up the kitchen or walk the dogs - anything mundane and automatic that still allows me to think freely. Doing such a mindless task allows my right-hand brain to kick in with a whole host of new angles which my overbearing left-hand brain was repressing.

The goal is to allow myself to jumping from idea to idea, but without judging them or reigning them in just because they might seem too silly. Some of the silliest ideas can evolve into something more realistic if only you give it the chance. So find ways to shush your left-brain when you need creative inspiration to strike.

Everyday life is not that conducive to creative thought. We get swept up in boring jobs and meetings and television - and some days there seems little need to think outside the box at all.

Fortunately many people discover creative thinking through their hobbies, if not through their careers. It's the reason why people play musical instruments or enjoy puzzle-solving computer games, and why most of us feel we have a novel in us. Creativity is second nature to all of us but this instinct does require some nurturing, or it is overtaken by another instinct altogether: being lazy.

Humans spent tens of thousands of years living in caves and jungles and allowing creativity to be a largely accidental process. In the last century, the tenacious pursuit of science and technology has forced many people into deliberate creative thought - and just look at the speed at which we progress now. There are billions of people on this planet, inspired by each other's creations and building upon their inventions to create a better world for ourselves and for future generations.

This pace of change is driven by two forces: our culture, which allows us to pass on information to the next generation, and our technology, which allows us to build better platforms to express our creativity. Just look at how those ripples in the pond are amplified by the internet and social media. These are powerful tools to propagate new ideas and inventions around the world in a matter of hours. There has never been a better time to develop your own creative thinking skills and make your contribution to the world.