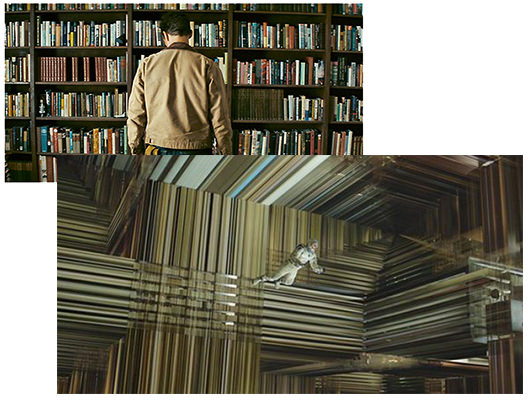 The Interstellar bookcase in three dimensions (top) and then represented spatially in five dimensions (lower).

One of the most enthralling concepts in Chris Nolan's Interstellar is when the hero, Cooper, travels into a black hole.

(Don't worry. It's a "gentle black hole" so he can pass through without suffering the ill effects of spaghettification.)

Once inside the greatest mystery of the universe, Cooper begins to perceive reality in five dimensions. Count them.

But there's a catch.

We are three-dimensional beings (comprising length, width and depth) moving through the fourth dimension (for the most part, time).

It's extremely difficult for us to imagine a fifth dimension but most scientists accept that more dimensions do exist and are just awaiting imminent proof.

But if it's so hard to visualize, how does this fifth-dimensional mind-buggery play out on the movie screen?

Quite beautifully, if you ask me.

The robot TARS explains to Cooper that he's seeing five dimensions mapped out in our familiar three-dimensional reality. This appears as an infinite and impossible Escher-style sprawl of bookcases. 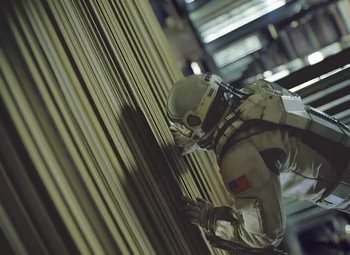 In so doing, he gains a glimpse at a plot-defining piece of space - his daughter's bedroom - across a number of years of her life.

So in this remarkably eerie scene we see Cooper desperately try to push his daughter's reality along the correct timeline, by sending Morse code messages containing quantum data across space and time.

He succeeds - and creates her destiny of saving the people of Earth.

Lucid Dreams of The Fifth Dimension

Spooked and in awe, Interstellar pressed on my mind the next day. I vowed to experience the fifth dimension in my lucid dreams.

I wake up. I'm in my bedroom and soon realize it's a false awakening; I'm dreaming. I float downstairs to see who else is around (no-one is) and then push through the dining room window.

Outside, the sky is gray and the clouds are far too low. I get an oppressive sense of being trapped and have to remind myself I'm dreaming.

Then I recall my lucid dream goal and fly upwards, seeking a random new location. I narrowly avoid becoming entangled in a tree (where is my mind tonight?) and fight off a fisherman on the ground below, who's trying to reel me back down to Earth.

With a burst of fresh lucidity I push on up... and instead of passing through more clouds I begin to pass through water. 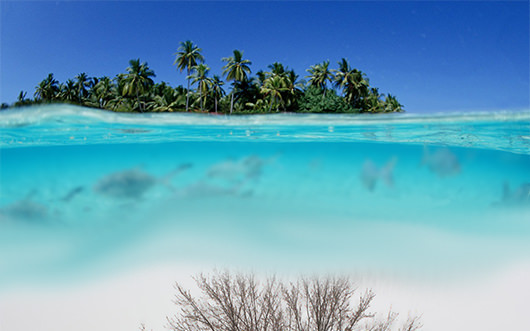 Almost immediately, my head breaks through the surface of a turquoise ocean and I am looking at the fingers of a tropical island which I can only identify as "B".

Meanwhile, my lower body is still dangling in the clouds from the world below.

I can see the thick clouds from the perspective of my kneecaps, while not interfering with my vision of the island.

Perhaps this inspires what happens next...

I ascend above the ocean and, while breathing in the gorgeous landscape, I start to see the same location at different points in time simultaneously. 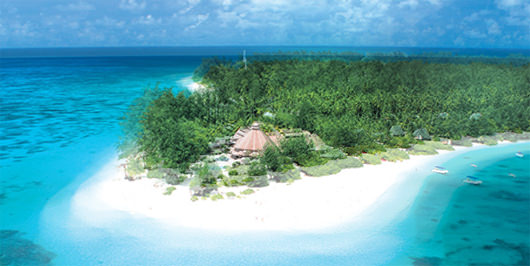 Then it speeds up, and I watch live action playing out at high speed.

From my aerial perspective I see 17th-century pirates sail in and out of port, modern-day tourists diving off their yachts, and a futuristic vision in which the island is cherished by botanists and entomologists who study its natural evolution.

I have to stress that this is all happening at once and I have an understanding of the dramas playing out on each timeline.

Could this be my dreaming mind's interpretation of fifth-dimensional space-time? I've certainly had lucid dreams like this before - for example, watching day and night play out simultaneously.

Some oneironauts even claim to experience two different dreams at the same time. Although I suspect this is just perceptual.

But on the basis of the fifth dimension being a wave of probabilities - in which a fifth-dimensional perspective could "see" all the possible timelines simultaneously - there is a lot more to be imagined here. And so I will push on in my future dreams.

How to Visualize The Fifth Dimension

Besides being blown away by the visuals in Interstellar, here's another way you might incubate a lucid dream about the fifth dimension.

By now, you can see I'm no physicist. Nor a pan-dimensional being. But I thought this would be a fun visualization experiment for lucid dreamers and it might inspire some cool lucid dreams.

Give this a go next time you're observing your hypnagogia, meditating or setting up your next lucid dream intention.

Your goal is better comprehend the fifth dimension.

If you're feeling lost, see my tutorial How to Visualize. 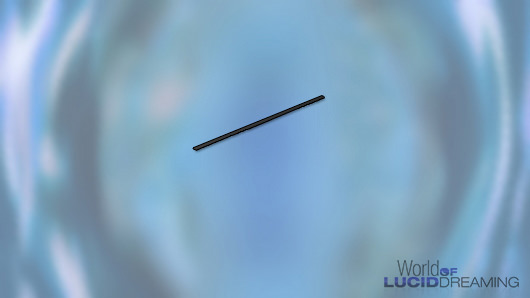 Length: Visualize one dimension as a line between two points. 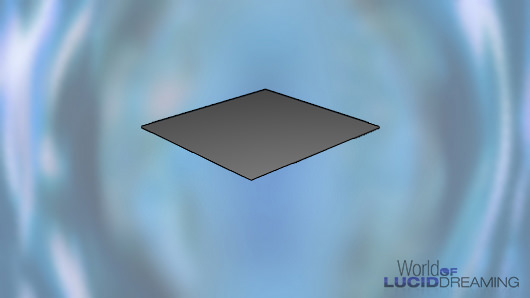 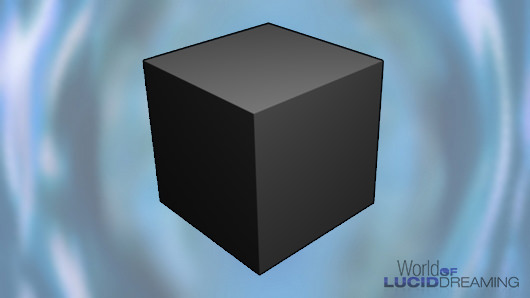 But now it gets tricky because we move beyond spacial dimensions. 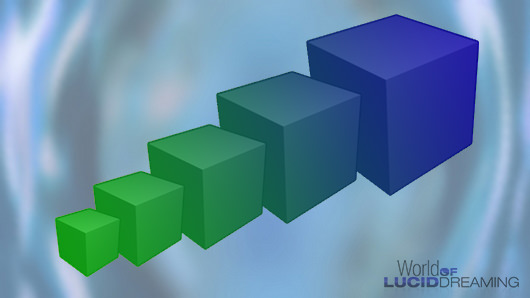 Time: Visualize four dimensions as a cube that changes over time. (In this example, it grows and changes color.) There is still only one cube in space.

Now it gets a lot trickier because we move beyond our awareness of reality altogether. Beyond space and relativity.

We move into the fifth dimension, a hypothetical dimension which physicists use to unify gravity with the electromagnetic force.

One theory is that the fifth dimension contains all the different possible outcomes of an event; a multiverse.

So let's put that in our picture. In space, we could imagine it like this: 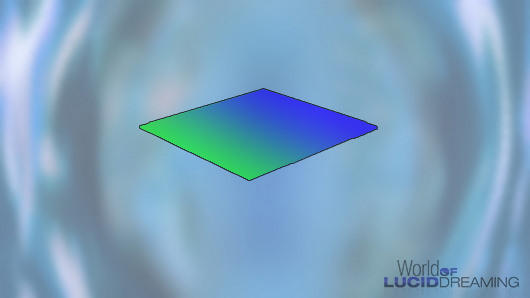 Reduce the four dimensional cubes to a plane - except this plane now contains five dimensions.

If you were to zoom in and examine all the dimensions in that plane, you'd see different outcomes of the four-dimensional cube.

Remember only one cube exists in our reality. It contains three dimensions of space, a fourth dimension of time, and a fifth dimension of alternative outcomes. 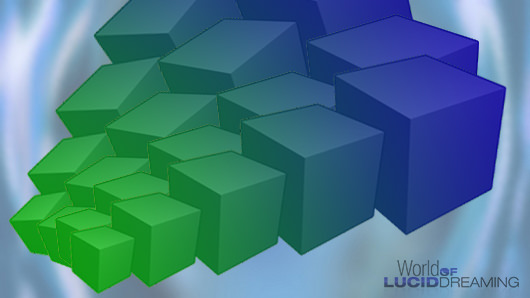 Now you're visualizing the possible futures from a single beginning variation of the cube. It's pretty neat that these are already called "timelines", making them easier to visualize in space.

The hard problem (for humble non-mathematicians like us) is that the fifth dimension is not a spacial one. It's as abstract to visualize as time.

But as Interstellar has shown, we can have a stab at feeling it out. Even on a two-dimensional movie screen.

So in your next lucid dream, I challenge you to experience your dreamworld in five dimensions. It's an experiment you can repeat many times with different results, because it's our conceptual understanding that we're probing.

One beauty of lucid dreams is they can show us information using more than our five main senses. (Ever telepathically "known" a dream character's life story? Or experienced a lucid dream as two separate characters at once?)

Unlike real life, lucid dreams allow us to view multiple scenes simultaneously, to experience past, present and future events as "now", and travel between distant places in the universe in an instant.

Perhaps this heightened state of lucid awareness will reveal new ways to understand a reality which we can't see: a tantalizing glimpse into that elusive and unimaginable fifth dimension.

These scientists have already used their dreams to solve complex problems - and they ended up changing the course of human history.