Another fascinating dream herb, Tagetes Lucida has a colourful history and is scientifically verified to affect your dreams 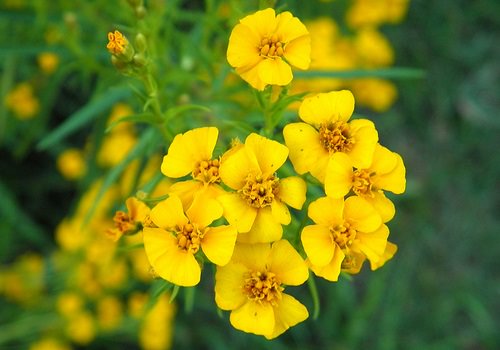 With Mexican Tarragon, you get a two-in-one special.

On the one hand, you can use it to sprinkle in your stews and sauces - to taste its aromatic liquorice and anise like flavour.

On the other hand, you can mix it up and imbibe a preparation to elevate your mood and enhance your dreams. You can even use it is as tool in your lucid dreaming exploration.

In this article we’ll take a look at all aspects of this herb and how you can make use of it.

The Aztecs would powder the herb (which they called Yahutli) and throw or blow it into the faces of their sacrificial victims to ‘dull their senses’. This would be shortly before cutting out their hearts and burning them on coal as a sacrifice to the God of Fire, Huehueteotl!

Well, then check out the work of Siegel, et all 1977, who travelled to live with and study the modern day Huichol Indians of Central Mexico. They found compelling evidence of ritualistic use dating back to at least the 16th century.

Even in modern day Mexico, the tradition persists in the Fiesta Del Pericon, where the herb continues to be burned at alters as an offering to St. Michael – in a symbolic attempt to ward off evil spirits.

The Yahutli mixture is smoked by the Huichol - recreationally as well as ceremonially – in long, thin corn husk cigarettes, or clay pipes. Either with strong native Indian tobacco, or alone.

In fact – as with many such cultures – when they find an abundant herb with useful properties, that herb tends to get integrated broadly across various aspects of the culture.

It’s not surprising therefore that Mexican Tarragon has its traditional medicinal uses: the Huichol use it as a bath additive for rheumatism, a tea for relaxation and sleep, a juice for relief for insect bites and also as an effective fumigant and insect repellent.

One of the first things I do when verifying a new oneirogen to add to the World of Lucid Dreaming vault, is search for scientific studies.

And let me tell you: for many of the rarer or more exotic dream herbs, these are sorely lacking!

But, I’m excited to say for Mexican Tarragon I was able to track down a reasonably methodical study: Lazar, 2002 (Page 1176, Entheogen Review Archive).

This group of intrepid entheobotantists went as far as to bioassay their preparations of Tagetes Lucida and created a formal dosing methodology. Not bad for a group of underfunded stoners.

“It creates a ‘lucid’ state which can be appreciated in a number of ways: listening to music, contemplating, grooving, introspection, communication, etc. Some of the effects noted are: clarity, alertness, closed-eye visuals, body warmth, body tingles, feeling of well-being, and some time-distortion. The period of alteration lasted 2 to 3 hours in most cases and there was no interference with sleeping afterwards, although many reported increased dreaming (sometimes with weird content).”

It’s important to note that the “lucid” these guys refer to is lucid in the waking sense, rather than a dreaming sense. Nevertheless, they confirmed a positive effect on dream recall and content under scientific conditions.

There are also various anecdotal reports from around the web confirming that the plant does in fact deserve its status as an oneirogen.

But as with many traditional dream herbs, it’s unlikely to be as effective a lucidity inducer for you as an acetylcholine esterase inhibitor – but it will have its own unique character that you can incorporate into your oneironautic arsenal alongside lucid dreaming induction techniques such as WILD or WBTB.

You can either smoke Mexican tarragon or consume it orally.

The recommendation is to use very fresh leaves when it comes to the Mexican Marigold plant. It is thought that the active ingredients dissipate extremely quickly from extract products.

Supply and quality varies. But at the time of writing, you can order fresh leaf from Waking Herbs - our recommended supplier.

Lazar in his study talks about oral use of an alcohol extract:

“The flavor was reminiscent of anise, so we made some ‘Anisette’ by extracting the active ingredient and flavor with grain alcohol, diluting and adding sugar. The result was good—both in taste and effects—but after the mixture was left standing a week or so, the effects were gone (except for those of the alcohol).”

“We have found that when ingesting this herb it is necessary to eat something with it (e.g., crackers, a cookie, etc.) so it will travel quickly to the intestine where it is absorbed”

For dosage guidelines, again referring back to Lazar’s work:

“This herb is quite variable among individuals, both relative to the quantity needed and to the direction of alteration. There were no bad experiences, just widely different ones. We have tested this herb up to 2,000 mg (by itself and in combination with other herbs) and most participants felt no need to increase the dosage further.”

I would suggest to start much lower maybe 250mg and work up from there.

<Mexican Tarragon is a proven oneirogen that you can use to explore altered dream states, if you invest the necessary time to grow and prepare it.

Its effects are real and documented... backed up by hundreds of years of ritual use and at least one scientific study

So it could well be worth trying out!