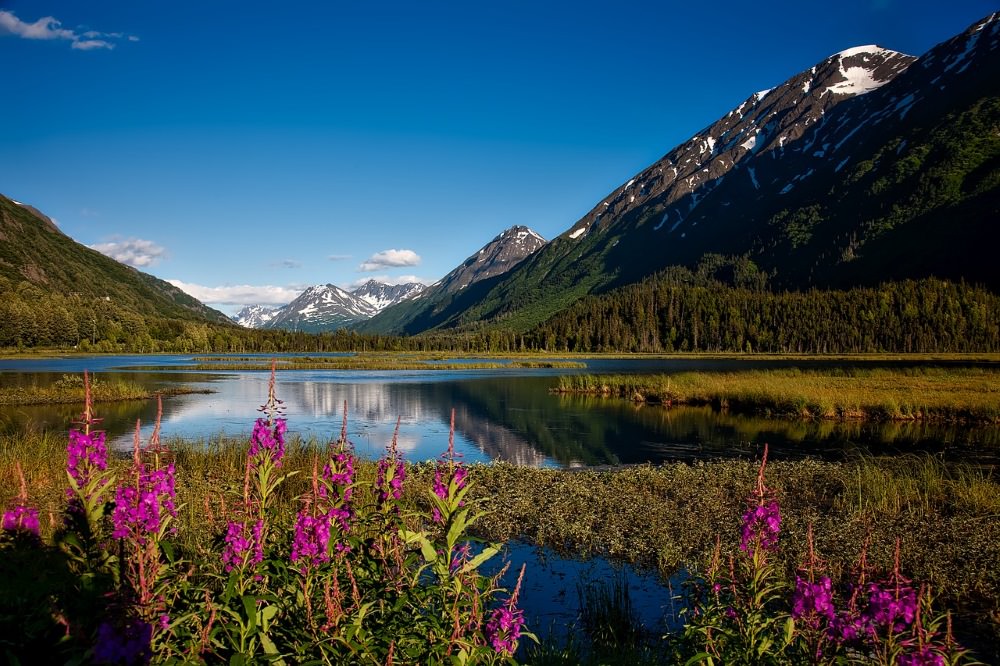 But I had no idea of the epic history and profound medicinal effects of this simple herb.

I certainly had no idea Mugwort could actually influence my dreams!

So join me for a relaxing cup of mugwort tea, as I take you through everything you could possibly wish to know about the subject. 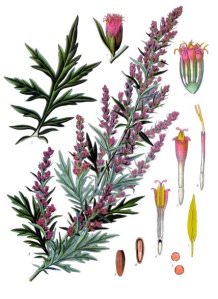 Mugwort is a common herb available in the wild or simply on roadsides throughout the world.

In fact, there are numerous different species in the Artemisia genus that get lumped together under the general ‘Mugwort’ banner. These include Artemiaia Vulgaris, Artemisia Annua, Chinese Mugwort, Alpine Mugwort, Hoary Mugwort – and even Artemisia Absinthium (a.k.a Wormwood).

For the purposes of dreaming, it seems the vulgaris and annua strains are most popular - although all varieities seem to have potential.

The plant itself is tall and hardy, with hairy purplish stems – which in late summer will sport small reddish-yellow disk flowers.

The leaves, flowers and roots of the plant that can be used to bestow a myriad of advantages and are where the dream magic lies within.

The word Artemisia comes from name Artemis - the Greek Goddess of the moon – and patron of womenly health. Mugwort has especially powerful benefits in regulating the menstrual cycle and easing the transition to menopause. In fact, many cultures have used mugwort for this purpose throughout history.

Of especial interest are the Chumash Indians of North America. These fascinating hunter-gathers were seafaring tribes who would traverse the sea in specially engineered boats to go whaling – and were among the first cultres recorded to do so!

It is estimated that these wise and wily Indians have been using mugwort in their healing and ritual practices for 13,000 years, where it is known as the ‘dream sage’. They use the herb to promote good dreams, which they consider an essential aspect of normal human functioning!

But that’s not all.

Other interesting historical titbits on the usage of mugwort include:

So, what's the research?

Those are some serious credentials!

But - if you’re anything like me - you'll want to know all about the scientific research on the matter before you start listening and giving away any credence.

Well, This interesting 2012 study speculates that the mugwort plant contains a sesquiterpene that appears to work through a serotonergic mechanism.

(it also tells us about how the Chumash actually use Mugwort to treat ADHD!)

Another similar study proves beyond doubt the benefits of Mugwort for premenstrual issues.

However, I’m afraid to say there is an absence of any formal scientific research on the relationship between mugwort and dreaming. Not altogether unsurprising, considering our society tends to plough its money into researching big pharma and synthetic chemicals rather than traditional herbs.

However, we have thousands of years of anecdotal evidence that tells us mugwort does have an effect on dreaming – so don’t let the scientist in you despair just yet!

What we do know is that some strains of Mugwort contains Thujone and that this likely plays a role in some of its psychoactive effects.

Thujone is also found in juniper (gin) and wormwood (absinthe), so mugwort is keeping good company when it comes to mind-bending effects!

The effects of mugwort

So what the hell happens when you actually take this supposedly incredible herb?

Simply put, you can expect to feel relaxed, calm and mellow. You shouldn't feel 'stoned' or 'dumb' like smoking weed.

I liken mugwort to a slightly stronger version of chamomile tea

But, the really interesting part about mugwort is its effects on dreaming – even potentially lucid dreaming.

So am I going to get any effects on my dreams? 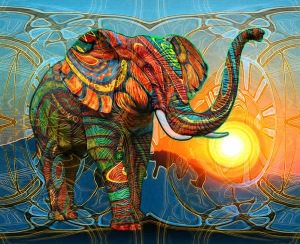 Whilst there’s no guarantee - as you can tell from the experiences listed below - mugwort is more than likely to have some degree of effect on your dreams.

Some users report comparatively mild results, whereas others experience full blown psychedelic trips whilst sleeping! As with most oneironautic herbs, the results are primarily determined by how well you prepare the plant and how patient you are with it.

The most commonly reported results are improved dream recall, an increase in dream vividness and even lucid dreams, enhanced creativity and sometimes increased colourfulness of your dreams.

I certainly experienced a noticable increase in the intensity of my hypnagogia.

Mugwort is not a panacea for lucid dreaming, but it can act as your assistent or catalyst. If you are interested in exploring the world of lucid dreaming, you should still practice all the normal techniques and methods.

Like all dream herbs, Mugwort is not a quick fix, but a tool that will assist you to explore the oneironautic world!

Nothing tells the story of what mugwort does for your dreams better than people’s own experiences. Let’s have a look at 4 reports from erowid.org.

Almost immediately I felt its effects, which consisted of a subtle lethargy and a bit of clumsiness. I made it to bed a half-hour later, and fell asleep right away. The dreams I had were mundane in content, and almost lucid (I have few lucid dreams normally). What was startling was the 'realness' of the dreams, as they appeared to me in full-on Technicolor splendour. I woke up feeling good, surprised that I remembered in great detail my dreams. I usually have good recall, but not THAT good.

When I awoke the next morning I recalled perhaps the most vivid and entertaining dream that I have ever had in my entire life.

I dreamt that I was in some kind of a museum. I knew it was a museum because there were sculptures and pieces of artwork hanging all around me. As we admired the artwork around us, the 'curator' came and told us that if we really wanted to see something, we should head around back to where another building was. He explained that most people couldn't see this structure, because it had been cleverly hidden by mirrors to prevent curious onlookers from discovering its secrets.

Sure enough, we all passed through a maze of mirrors and soon climbed a small, sloping hill and eventually came upon a huge, vibrantly red building shaped sort of like the Alamo. I cannot stress enough how enhanced the colors were, it was like a psilocybin mushroom trip. There were lots of people milling around, and they told me, 'You've really got to see what's down there! It's amazing!'. […]

As I said earlier, I had never really been able to enjoy the dreaming experience before I tried this herb, and needless to say, I'm very thankful for this plant. This herb is the REAL DEAL.

I'm not saying that Mugwort is anything spectacular, but there are definitely an increase in vivid, even bizarre technicolour dreams after using it.

-The Storm via erowid

My husband and I smoked mugwort together yesterday and we both had the most wonderful dreams. My husband is a writer and literally dreamed an entire movie from start to finish that sounds to me like it could be his opus! My dream was full of spiritual validation and encouragement. I am always a vivid dreamer, but I have not had a dream like this in a long time! Next time I will try it in tea form because I hear it has a high tar content. 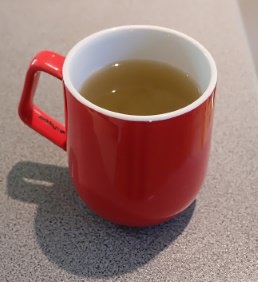 The easiest way to take mugwort is simply to brew up an old-fashioned cup of tea! Just use around a teaspoon of plant material - roots, leaves, flowers, stems are all fine - and a kettle of hot water. Easy.

Steep for ten minutes – or longer, experiment. Honey is an excellent additive.

The taste of mugwort tea is most excellent!

Smoking mugwort is probably the most effective way to get the active components into your system.

Smoke the plant shortly before retiring to bed, to experience its effects on your dreams.

You can smoke mugwort in the same way as you smoke anything else – such as tobacco for example. Simply hand roll a cigarette – either with the mugwort alone or with a mixture of other herbs.

Or, if you have access to a water pipe, you can use this.

Where to get mugwort

If you happen to live nearby one of the many road side bushes, you can simply go out and pick some! 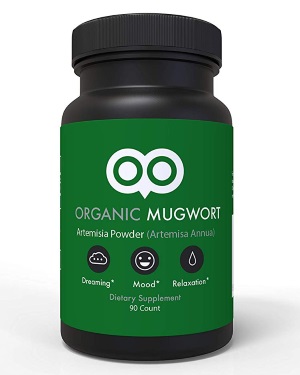 We'd recommend this one as the mugwort inside is fresh - you can tell because of the pungent aroma that's released when you break the capsules open! It's also 100% organic, so you can rest assured that you are getting a pure, high quality product.

Most notably, pregnant or lactating women should never use mugwort, or come into any contact with it! Due to the fact it causes increased blood flow to the pelvic area, mugwort can cause miscarriage!

Whilst thujone can be toxic in high enough does, I have not found any reports of serious side effects online. In fact, given the herb has been used as a medicine for millennia – there are rather more benefits than side effects.

Mugwort is a delightful herb. It makes a wonderful and satisfying cup of tea.

The keyword here is… mild (and relaxing).

But all in all, it's a wonderful addition to your dream herb library.