Pregnancy Dreams: Why Dreams During Pregnancy Are So Intense 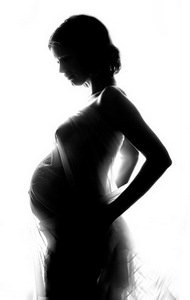 Pregnancy dreams can certainly take some odd turns... Since becoming pregnant, my dream recall has shot up because of disturbed sleep (you're more likely to remember dreams from every sleep cycle when you get up multiple times in the night to pee). But perhaps more disturbingly, I've had many nightmares and anxiety dreams.

Although the literal content of these pregnancy dreams are not things I worry about (like being physically attacked) in dreamland they are symbolic of common feelings associated with pregnancy (fear, vulnerability, uncertainty).

The truth is, being pregnant with your first child marks the beginning of a major life upheaval. It signifies a countdown to the end of your "couple life" and the onset of some big unknowns - like what kind of parent you'll be and how it will change your lifestyle. The recurring themes of anxiety, fear and vulnerability creep into your nighttime adventures whether you like it or not...

Pregnancy Dreams in The First Trimester

In the first trimester (0-3 months) your body is flooded with the pregnancy hormones progesterone, estrogen and human chorionic gonadotrophin (hCG).

Hormones can have dramatic effects on the mind (mood swings) as well as the body (morning sickness). Think of this stage as bouts of severe PMS; emotional mood swings cause emotional thoughts, and therefore emotional dreams during pregnancy.

During the first trimester I had frequent nightmares based on a recurring theme: the need to be protected by Pete. Night after night, I had dreams of being trapped, held up, and attacked. Each time, the dream ended (quite well, as it happened) with Pete fighting off the bad guys and saving me (yay).

Dream analysis might reveal these to be expressions of vulnerability and loss of control, which are common feelings in pregnancy. The hormones merely amplify these underlying fears and that's what causes the crazy nightmares.

According to psychologist Patricia Garfield, author of Women's Bodies, Women's Dreams, there are recurring pregnancy dream themes across populations:

I can think of first-hand examples that reflect the first two:

Dream: I give birth to a cute little baby. It just pops on out.

Analysis: This is a common pregnancy dream and said to be a combination of hopes for an easy delivery and an incomplete understanding of labor.

Awareness of Your Changing Body

Dream: I am at work in a tall office block, when we feel an earthquake tremor. I urge everyone out the building because I know the tower is about to collapse, but no-one believes me. Finally, they file out, and as we reach the lobby the building finally collapses under it's own weight. We just make it out the door.

Analysis: Research shows that pregnancy dreams often reference buildings where things are produced - factories, shipyards, workplaces - as paralleling the production of a baby inside your body. This dream may have symbolized fears about my body (the tower) deteriorating under the stresses of pregnancy.

At the time I was suffering painful physical symptoms of pregnancy IBS and felt as if my body were failing me, and there was nothing I could do to fix it (most medicines and painkillers are off limits during pregnancy).

Pregnancy Dreams in The Second Trimester

In the second trimester (4-6 months) the levels of hCG have dropped away, with the placenta and extra blood now doing the work of nourishing the baby. You still have plenty of progesterone and estrogen swimming around.

This is usually the best bit of pregnancy where your body has adjusted to its new parasite friend and all the necessary changes that come with it. As I write, I'm 5 months pregnant. It's definitely a more peaceful ride, though there are clearly hormonal and psychological factors still influencing my dreams.

During this stage, Garfield says, dreams during pregnancy are more likely to contain:

Once again, the first two definitely rang true for me: 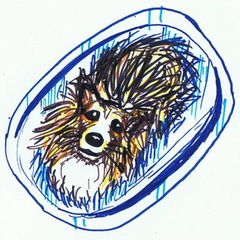 Dream: I'm sitting in the bath when my Shetland Sheepdog, Piper, pops into the room. I pick him up and he shrinks down to the size of a large mouse. He wants to bathe in the soap dish. I fill the dish with water and he sits there, hopelessly adorable and staring at me with big eyes while I bathe him. I feel an overwhelming surge of love for the little guy.

Analysis: The presence of baby animals is thought to reveal your gut instincts towards nurturing your young. In pregnancy dreams, these animals are often cuddly and cute, but can morph, say from a sea creature to land mammal, as if you are watching it grow and evolve. I think Piper becoming miniaturized and adorable reflects my feelings toward the unborn baby; I am really looking forward to having this cute little critter to care for.

Anxiety About Losing Your Mate

Dream: I am in a city, searching for Pete who has the elusive characteristics of Eric Bana in The Time Traveler's Wife. Every time I find him, we share a few precious moments before he fades away in time and I don't know when I'll see him again. Our dogs, Howard and Piper, turn up to help me search, and I have a strong feeling they are my sons. Finally, unable to find Pete, they decide to leave forever to go on a lifelong search for him, leaving me totally alone and hopeless in the world.

Analysis: Some pregnancy dreams convey husbands having love affairs or no longer caring about their pregnant wives. This gives the woman a sense of true vulnerability. In my experience I've had recurring dreams of physically losing Pete for mysterious reasons. Although the real world insecurity may be largely unfounded, the dreaming mind tries to work through this fear as a worst case scenario.

Feeling The Baby Kick During Dreams

Here's something weird that no pregnancy book ever warned me about...

During the second trimester you start to feel the baby kick and move inside you. For me, this this began around 17 weeks. It started off as a fluttering sensation but the movements have become progressively stronger. 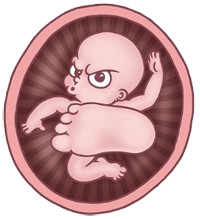 After a couple of weeks of this, I was having a dream when the baby started moving around (in real life). The movement was transferred - and amplified - in the dreamworld, so I felt like I had a washing machine going off inside me. It was an alarming feeling! I woke up about 20 seconds later, gasping and thrashing around like a lunatic.

I have since begun to link the baby's movements to doing a reality check. It's suitably random enough to occur multiple times per day, and next time the baby kicks while I'm dreaming it'll help me have a lucid dream. (The timing is useful for this too. At this stage of pregnancy, lying down causes my muscles to relax and the fetus has more room to jump about. I feel the most movement when I go to sleep and wake up in the morning.)

Pregnancy Dreams in The Third Trimester

Dreams in the third trimester (7-9 months) tend to be guided by psychological factors based on your expectations of the baby and it becoming a dominant feature of your life. According to Garfield, these pregnancy dreams most commonly include:

Studies have found that when expectant mothers guess the sex of their baby based on their dreams during pregnancy, they are correct 50% of the time - the same as random chance. No help there then.

Further research has looked at women who had short labors vs long labors. A strong connection was found between dream content and length of labor. Amazingly, 94% of women who gave birth quickly had been assertive in at least one dream about birth, reflecting their self-confidence. Of those who endured long labors, 70% had suffered nightmares about birth where they felt like victims.

While pregnancy dreams can be a rollercoaster of emotions (much like the experience of pregnancy itself), they do provide opportunities to analyze and reconcile deep rooted anxieties. From parental instincts to the length of labor, your dreams during pregnancy can reveal a lot about the future.