SHADOW is an iOS app in development that, at its most basic level, will help you record and remember your dreams.

But there is a lot more to SHADOW than meets the eye. As I write, the creators are rounding up a Kickstarter campaign, having raised $77,000 (of a $50,000 target). Their primary goal: to create the world's biggest dream database and analyze that data. No doubt then, SHADOW is an ambitious app, created by some ambitious dreamers.

Essentially, SHADOW is a smart alarm clock that provides escalating alarms to gradually transition you through your hypnopompic state.

When you awaken, you dictate your dream and SHADOW will transcribe it into words - or you can type it into a blank text box. If you can't remember any dreams, SHADOW will ask you a series of questions to jog your memory.

Once the data is recorded in the app, you decide how far and wide you want to share it. SHADOW is designed to be social, but dreaming is inherently private. So it's really a judgment call - and every dream may be different. Keep dreams to yourself or push them to the cloud, where your personal data is removed and your dream content ready to be analyzed on a larger scale... 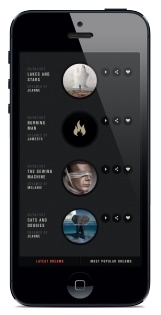 When combined with dream reports from other app users from all over the world, the SHADOW team can mine the data and make new discoveries about the nature of our dreams. Over time, patterns emerge.

As a user, the more dreams you record, the more accurate and rewarding the experience becomes. SHADOW visualizes your sleep and dream patterns and identifies common themes. When combined with other users' dream reports, it turns these symbols and experiences into insights.

All the while you're learning about yourself, the SHADOW team are working behind the scenes to organize the dream content into the largest database of human dream knowledge in the world.

Thanks to a rush of early backers, SHADOW reached its fundraising goal in the first week. The initial $50,000 raised will be used to create the iOS version of the app, which will be available from December 2013 onwards.

However, there are still a few days left to contribute to the app development, giving you early access to SHADOW as well as other bonuses. While the iOS version is fully funded, you can still contribute towards its more advanced features (an even smarter "smart" alarm), or you can pledge money to the Android and Windows versions, which haven't yet reached their goals.

For more details on this innovative app, check out the Kickstarter campaign.