Home >
The Human Mind
> The Man Who Thinks He's Dead

The Man Who Thinks He's Dead 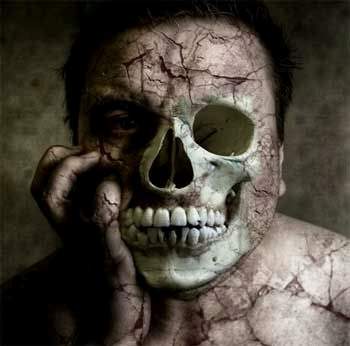 Nine years ago in Britain, a man known only as Graham began to suffer the indomitable suspicion that he was dead.

Diagnosed with the extremely rare psychological condition, Cotard's Syndrome, Graham's belief was that "...my brain didn't exist any more," he told New Scientist.

"I didn't need to eat, or speak, or do anything. I ended up spending time in the graveyard because that was the closest I could get to death."

Cotard's Syndrome is characterized by the delusional belief that the sufferer is dead, does not exist, is putrefying, or has lost their blood or internal organs. In rare cases it can cause delusions of immortality.

Like many cases, Graham's delusion stemmed from severe depression. The previous year he had attempted suicide by getting into the bath with an electrical appliance. Now, he said, "I just felt like my brain didn't exist any more. I'd fried it in the bath."

Even as Graham sat talking, breathing, going about his daily business, he still could not accept the possibility that his brain existed or was alive.

The bizarre condition was identified in 1880, when the French neurologist Jules Cotard described le delire de negation ("negation delirium") as ranging from mild (despair and self-loathing) to severe (intense delusions and chronic depression).

In one of his lectures, Cotard described a patient known as Mademoiselle X, who denied the existence of several parts of her body, as well as the need to eat. Later she claimed she was eternally damned and could not die a natural death. In the end she passed away from starvation.

A modern-day case of Cotard Delusion occurred in a man who had a motorcycle accident: in January 1990, after his discharge from hospital in Edinburgh, his mother took him to South Africa. He was convinced that he had been taken to hell (which was confirmed by the heat), and that he had died of septicemia (which had been a risk early in his recovery), or perhaps from AIDS (he had read a story about someone with AIDS who died from septicemia), or from an overdose of a yellow fever injection. He thought he had borrowed his mother's spirit to show him round hell, and that she was asleep in Scotland.

Meanwhile, a 14-year-old boy suffered from recurring episodes of Cotard's which lasted up to three months at a time. In each episode, he would say that everyone is dead, including trees. He would also describe himself as being a dead body. He warned that the world would be destroyed within a few hours.

Perhaps the most fascinating aspect of Cotard's Syndrome is the physiology. New research has revealed that, in Graham's brain at least, activity in the areas responsible for the seat of consciousness is mysteriously missing...

A PET Scan of Cotard's Syndrome

In Graham, for the first time ever, researchers had the opportunity to examine the physiology of Cotard's Syndrome with a positron emission tomography (PET) scan. The brain scan yielded some fascinating results about how consciousness is constructed.

"Graham's brain function resembles that of someone during anaesthesia or sleep."

Metabolic activity across large areas of Graham's frontal and parietal regions was so startlingly low that they likened it to someone in a vegetative state.

Interestingly, parts of these areas form the default mode network - thought to be responsible for creating consciousness, theory of mind, and the ability to remember past events and subsequently forge a sense of self.

"I've been analysing PET scans for 15 years and I've never seen anyone who was on his feet with such an abnormal result," Steven Laureys at the University of Liege told New Scientist. "Graham's brain function resembles that of someone during anaesthesia or sleep."

Although the results didn't mean much to Graham at the time, the PET scans were the first step in his recovery. Based on observing the incredibly low levels of activity in his brain, a newly specialized regime of medication and therapy could begin.

It was only after months under the new regime that Graham remotely rediscovered what it means to live a normal life. "I couldn't say I'm back to normal, but I go out and do things around the house."

"I don't feel that brain-dead any more. Things just feel a bit bizarre sometimes," Graham said. "I'm not afraid of death. But that's not to do with what happened - we're all going to die sometime. I'm just lucky to be alive now."