Home >
In The Media
> Vanilla Sky: Beyond Lucid Dreams 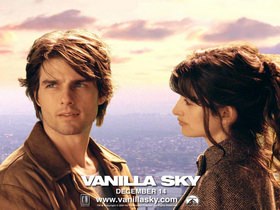 Vanilla Sky is, fundamentally, a movie about lucid dreaming. And there is something about it that only lucid dreamers will recognize.

From the opening credits where our main character dreams of soaring over New York City, to the incorporation of the sound of his radio alarm: "Open your eyes, David". The whole movie reflects the power of the conscious dreamworld and the merging of dreams and waking reality.

David wakes up - another day in his perfect life. He heads to work at the publishing empire he inherited from his father. But something is wrong with this picture: the streets of New York are completely devoid of human life. He runs through an empty Times Square, confused. Is this a dream?

David wakes up - again. A lucid dreaming movie wouldn't be complete without the odd false awakening now would it?

The movie progresses in a linear fashion for a while - but don't get used to it. David, a habitual womanizer, suddenly spies a gal he could actually fall in love with: Sophia. The egomaniac spends one entire night getting to know the captivating Sophia and becomes completely infatuated with her.

The next morning he makes the biggest mistake of his life. He gets into the car with his embittered ex-girlfriend, Julie Gianni, who is suffering a case of unrequited love. The result forms the foundation of Vanilla Sky, seeing David spiraling into a pit of self-loathing and pining after the relationship with Sophia that he just can't manage to forge.

The movie then becomes a complex web of interactions, jumping between the past and the future, where David finds himself re-telling his story to a psychologist, Dr McCabe. However, don't be fooled by anyone who says this movie is over-complicated. It's not. And I think I have a fair judgment since I still get baffled by a lot of guy flicks. Don't even ask me to tell you what American Gangster was about. I sat through all three hours of Denzel "one look" Washington and am still none the wiser. Ahem.

Throughout Vanilla Sky, there are a dozen clues which nod towards the final twist (and I haven't spoiled it for you by talking about lucid dreams). I would list them here but that would be a major spoiler. However, do look out for scenes containing Monet's Vanilla Sky, after which this was named.

"I'll tell you in another life, when we are both cats." ~ Sophia, Vanilla Sky

There are some concepts that non-lucid dreamers will miss during this movie. David finds himself unconsciously guiding the lucid dream scenes, which is perhaps why they turn out so disastrously for him. I think all lucid dreamers can relate to that when they have only partial lucidity - and can't understand why some commands won't work. We have the influence of the unconscious mind to thank for that. 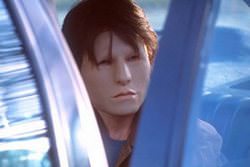 I also liked the way inconsistencies feed through his life like a dream, which other people will simply put down to his temporary derangement. There is also a great scene where Tech Support enters David's lucid dream and shows him how to control the behavior of everyone around him. Lucid dreaming gold!

Best of all, I like the conclusion of Vanilla Sky. There is a subtle rundown of all the loose plot ends as David ascends into the sky - in what has to be the world's tallest glass elevator (a la Charlie and The Chocolate Factory). The entire life of David and those close to him are drawn into scary perspective as we realize the true purpose of this movie.

Vanilla Sky has a great supporting cast - my favorite of which were:

As the main character, Tom Cruise gets a lot of screen time. For some reason his face just annoys most people I know. I see what they mean. But that's a ridiculous reason to shun this movie altogether, which many do. Vanilla Sky is massively underrated, which sadly goes to show how few people actually know about or have a passion for lucid dreaming.

The soundtrack to this movie is great: bold and eclectic. It goes all over the place, featuring Radiohead, REM, Paul McCartney, The Monkees, Leftfield, Bob Dylan and The Chemical Brothers. I especially like the upbeat music when David has his worst breakdown moments. It becomes the soundtrack to his life. 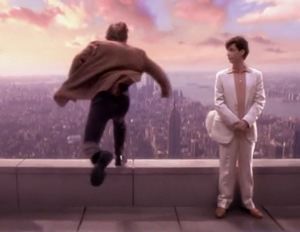 This movie is the re-make of the Spanish original, Open Your Eyes, which also starred Penelope Cruz. Many people praise the Spanish version and say that Vanilla Sky is just an overproduced, glossy Hollywood re-make. I think both versions are good in their own right. You may find, however, that reading the Spanish subtitles in Abre Los Ojos impairs your movie enjoyment. Vanilla Sky also boasts the bigger budget, making for a more visually enticing feast.

My rating is 4 out of 5 stars. I'd give it 5 stars if only it appealed to a more people, but it simply doesn't. To that end my advice is: if you enjoyed Eternal Sunshine of The Spotless Mind - you will almost certainly enjoy Vanilla Sky too.