How jet lag and sleep deprivation may improve your ability to have lucid dreams - and false awakenings (the little known backdoor to lucidity).

At its worst, jet lag can turn your sleep cycles upside down.

So the big question is: does jet lag affect lucid dreaming? Could it even enhance your ability to have conscious dreams? 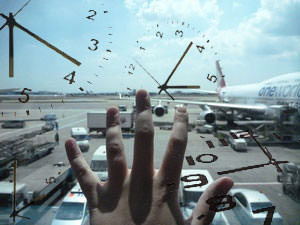 What is Jet Lag?

Jet lag is where your body's internal Circadian clock falls out of sync with the actual time of day in your local environment.

It's a discord between the external world (and its 40 separate time zones) and the internal 24-hour timekeeping device maintained by your brain. This internal clock dictates when you feel alert, sleepy, hungry and even when to empty your bowels. It is coordinated by the release of different chemicals at different times of day.

The problem arises when we go jet setting around the planet. Our bodies haven't yet evolved to cope with sudden time zone shifts - with daylight hours giddily swapping roles with nighttime. So the chemical release takes time to catch up.

The most extreme example is a 12-hour time zone shift experienced when you travel from one side of the world to the other. I recently underwent this on a trip from New Zealand to Europe.

Curiously, I had more lucid dreams on this trip than expected - so what was it about shifting sleep cycles that triggered them?

My first lucid dream occurred on the plane from Australia to Dubai. It was a long 14-hour haul that went through the night.

Dozing in my upright plane seat, I found it difficult to enter a deep sleep and so I made the most of this light sleep, dipping in and out of consciousness. This is actually an ideal state to have lucid dreams. And I did - it was especially easy to have WILDs.

In this instance, the precursor wasn't so much jet lag as it was sleeping in an uncomfortable public environment while being very tired.

After 23 hours flying, my first sleep in a real bed was in Athens. My head hit the pillow at 8pm local time and I don't remember dreaming a thing when I woke up at 5am the next morning.

So far, so bad. This was the effect of sleep deprivation, and when you're that tired, you need to catch up on your deep, Slow Wave Sleep first.

Then came the REM rebound.

I went back to sleep and between 5am and 9am, I experienced lots and lots of vivid dreams, and finally a decent lucid dream. This was caused by the REM rebound effect: catching up on lost Rapid Eye Movement sleep. This is the space in which most of your longest and most vivid dreams occur. It's also essential to healthy brain functioning.

So an important thing to appreciate about jet lag / sleep deprivation is that while it initially ruins your dream sleep, your body will naturally recoup these losses later on. And that rebound effect can pretty easily lead to lucid dreams.

Another notable effect of jet lag was the increased number of false awakenings that hit during the morning hours.

The most memorable one happened during my first night's sleep after returning to New Zealand. After a 16-hour slumber which made up for two night's lost sleep, I experienced three false awakenings in a row:

As usual, I awoke feeling the dogs sleeping at the foot of bed. One of them was a heavy weight on my feet. So I drowsily got up and put the dogs out the room, shut the door and returned to bed. Very soon, I felt the dogs on the bed again.

For a second time, I got up and shut the dogs outside, only to find that when I got all comfy in bed again the heavy lump was back on my feet.

Frustrated, I got up and put them out the room for a third time. It took three goes to recognize that I wasn't getting out of bed at all; I was only dreaming it!

So why is this more likely to happen when you're jet lagged?

There are a few good reasons for this but it all comes down to the REM rebound effect once again. As a result I was experiencing lots of dreams with a certain level of consciousness (some lucid, some non-lucid). I was catching up on lost dream time, and I was doing it at a time when my brain expected me to be alert and awake.

Throw in the fact that I was sleeping in a different bed under unusual circumstances and was thinking about the next day (I'd been away for a month and coming home felt pretty weird). This is often the precursor to a false awakening.

In fact, you've probably had a false awakening happen to you even if you're not a lucid dreamer - but they are definitely more common one you go down the road of lucidity.

False awakenings are also a little-known backdoor to lucid dreams - provided you remember to always do a reality check upon waking ;)

I don't recommend all-out sleep deprivation as an indirect route to having lucid dreams. However there are some gentler ways to manipulate your sleep cycles to encourage more conscious REM sleep. These include:

If your lifestyle is already too hectic to afford any sleep loss, then please don't attempt either of these methods. However if you can get away with it, they are powerful methods that are known to trigger lucidity in total beginners.

And, if you plan to cross multiple time zones in future, remember to brush up on your WILD technique and perform lots of reality checks... The unavoidable combination of sleep deprivation and jet lag will do the rest.