Charlie Morley on Dreams of Awakening 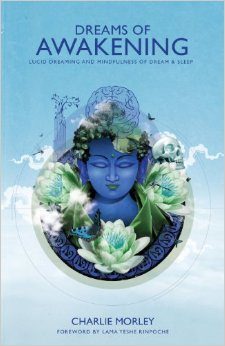 Charlie Morley - a popular lucid dreaming teacher within the context of Tibetan Buddhism - has written a new book called Dreams of Awakening. In our follow-up interview, Charlie explains who the book is for and exactly what you'll learn.

(If you're new to Charlie's work, check out my original interview with him here for more on his background in lucid dreaming.)

Can you tell us about your new book, Dreams of Awakening?

Charlie Morley: The press release says that it's "a thorough and exciting exploration of lucid dreaming practice and theory within both Western and Tibetan Buddhist contexts" so I guess I'd better stick with that!

Actually, that is a pretty good description really. My aspiration is that this is the book that will fill the gap between the often quite limited scope of some Western lucid dreaming books and the often seemingly unattainable scope of some Tibetan Dream Yoga books. I mean, I am a full on Buddhist: I've lived in Samye Dzong Buddhist Centre for over 3 years and have been practicing Tibetan Buddhism for over 10 years, but I am also a young lucid dreaming teacher who loves Western science and Jungian psychology and the potential that this practice holds for everyday people, not just for hardcore Buddhists.

This book is a reflection of this I hope. I urge the reader to go beyond just flying about and meeting aspects of our own psyche and move into the much deeper possibilities of Tibetan dream yoga. And yet at no point do I try the whole "you can only do these practices if you're a Buddhist" thing. There are some practices that do require initiation from a qualified meditation master of the lineage but there are also many which we can all practice. These are what we focus on in the book.

This book has a three part structure: Ground, Path, and Germination.

Part 1 lays the ground with all the latest neuroscience about how lucid dreaming actually works as well as looking at all the psychological and spiritual benefits of lucid dreaming and Tibetan dream yoga.

Part 2 gives us the map of the actual path and is made up of dozens of lucid dreaming techniques and dream yoga exercises.

And finally Part 3 is the germination of the practice when we explore all the weird and wonderful stuff like OBEs, prophetic dreaming and lucid living! Sorry, that was quite a long answer wasn't it?

What makes this book different to other lucid dreaming books?

Charlie Morley: The main difference is that this book explores for the first time the "Mindfulness of Dream & Sleep" practices that I developed with my teacher Rob Nairn (a mindfulness mediation teacher who was instructed to teach by the Dalai Lama).

Mindfulness of Dream & Sleep is a new holistic approach to lucid dreaming within the contexts of both mindfulness mediation and Tibetan Buddhism. This approach doesn't just focus on lucid dreaming but instead extends our exploration into conscious sleeping practices, daytime lucidity training and round the clock awareness which will hopefully help people move beyond straight up lucid dreaming and to start to look at all aspects of sleep as portals into a space beyond limitation.

Can you talk us through the process of writing the book?

Charlie Morley: The book took about three and half years to write and was originally based on transcripts of my talks because I really wanted to try and keep my "voice" present throughout the book. I teach in quite a conversational way which hopefully helps to de-mystify some of the more complex sounding Tibetan Buddhist concepts and I wanted to make sure that this easy-to-relate style was reflected in the book too.

I had never written a book before but I had written plays. I trained as a playwright at university and was writing theatre for young people throughout my early 20s as part of the whole hip hop theatre scene that I was involved in at the time. This meant that I approached writing the book as I would writing a play.

The most obvious manifestation of this is in the three-act structure of the book (Ground, Path, and Germination) and the fact that I have tried to thread my own stories in throughout the book to allow for something of a narrative arc throughout. Gosh, that sounds a bit pretentious actually! I guess I just wrote the book from the experience that I had which was writing for theatre. Yeah that sounds a bit better! Oh and I thought the book was finished about a year before it actually was because once Hay House got hold of it they really encouraged me to go deeper into the research and practices so that the book stood tall academically as well as practically.

There is a lot more mainstream interest in lucid dreaming nowadays. Will your book appeal to everyone or just hardcore lucid dreamers?

What response has the book received so far?

Charlie Morley: So far I have actually been a bit embarrassed by how good the response has been. Certain organisations and journalists got sent press copies two weeks ago and so far we have had reviews saying stuff like "This book is life changing!" and "One of the best books on dream work that I have ever read."

So I guess they like it but, maybe they are just saying that because I sent them a free copy! Anyway, I will definitely be careful not to believe my own hype because although it's the journalists who write the reviews, it's the lucid dreamers who visit your website and who read this interview who really count. So I truly hope that they like it too and that it will help to expand their practice.

Have you got any more books in the pipeline?

Charlie Morley: Yup. I literally just signed the contract for my second book with Hay House yesterday. The second book is much more of a beginners guide to lucid dreaming because it's part of their "Hay House Basics" range but it will be a great introduction to lucid dreaming for people who perhaps aren't so into the deeper spiritual aspects which we explore in Dreams of Awakening.

Oh and I also have an audio CD of guided sleep and dream meditations also released by Hay House which comes out in December. It's called Lucid Dreaming, Conscious Sleeping and is available through Amazon and in shops too. Hope you enjoy it!

If you would like to meet Charlie in person, his teaching schedule (including the Lucid Dreaming World Tour with Toltec teacher Sergio Magana) is available at CharleyMorley.com

Order Dreams of Awakening on Amazon