Fatal Familial Insomnia (FFI) is a rare sleep disorder. It's genetic, and has been diagnosed in less than 40 families worldwide.

Perhaps the most famous case is that of the Chicago music teacher, Michael Corke, who featured in the BBC documentary The Man Who Never Slept.

FFI is a truly dark disease. It begins as a sudden and unexplained sleeplessness sometime during middle age. As this is after the childrearing years, most sufferers have already passed on the cursed gene to their children.

Total insomnia ensues. It's as if, one day, the brain forgets how to sleep, and remains in a permanent state of wakefulness until death brings mercy.

The Symptoms of Fatal Familial Insomnia

Fatal insomnia is a baffling condition because its symptoms resemble many common diseases like dementia, end-stage alcoholism and encephalitis.

The main symptom of FFI is the inability to sleep, and this causes high pulse and blood pressure, excessive sweating and a loss of coordination and motor skills.

The disease manifests itself in four deteriorating stages:

One of the most tragic aspects of FFI is that though the sufferer shows signs of dementia, they have a clear understanding of what is happening to them, while enduring the physical agony of total sleeplessness.

Little was known about this disease until the last decade, when scientists found it to be caused by a genetic mutation that brings about prion disease.

The term prion ("pree-on") was invented by Stanley Prusiner in the 1980s as the name for an infectious agent. Specifically, a prion is a mis-folded protein that permanently affects the structure of the brain.

Indeed, recent studies have found a direct correlation between Alzheimer's, sleep loss, and the formation of amyloid plaques in the brain.

In FFI, prions eat away the thalamus region of the brain, responsible for regulating sleep and various sensory and motor systems, replacing it with amyloid plaques.

This increasingly prevents the sufferer from losing consciousness - although their EEG readings show signs associated with REM sleep during waking hours. They are so sleep deprived, they are dreaming while awake.

Because Fatal Familial Insomnia is genetic, there is a 50% chance of a parent passing it on to their offspring. A diagnostic test is now available, but there is no known cure for FFI. The only hope is that gene therapy will offer a solution to future generations. 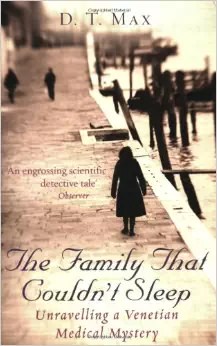 The Family That Couldn't Sleep

The Family That Couldn't Sleep by D T Max details the history of Fatal Familial Insomnia and prion disease. It reads like a detective story with alarming twists and turns, including just how close the population of Britain came to suffering a major epidemic of CJD.

From Publisher's Weekly: "In 1765, Venetian doctors were stumped by the death of a man who had suffered from insomnia for more than a year and spent his final months paralyzed by exhaustion. Over the next two centuries, many of his descendants would develop similarly fatal symptoms, with a range of misdiagnoses, from encephalitis to alcohol withdrawal.

Finally, in the early 1990s, their disease was recognized as a rare genetic form of prion disease. The family reluctantly shared their history of Fatal Familial Insomnia with Max, who has written about science and literature for the New York Times Magazine and other publications. Max (inspired in part by his own neuromuscular disorder) has crafted a powerfully empathetic account of their efforts to make sense of their suffering and find a cure. But this is only half the story.

Looking at prion disease in general, Max doubles back to the English Mad Cow epidemic of the 1990s, retracing established backstories among New Guinea aboriginals and European sheep herds. There's enough fascinating material - in particular, a theory suggesting that early humans were nearly wiped out by a plague spread by cannibalism - to keep readers engaged, but they're likely to want still more about the genuinely captivating family drama."