Home >
In The Media
> An Inception Review

As a long time lucid dreamer, I'd been eagerly awaiting the release of Inception. It is such a rare opportunity that I get to enjoy a sci-fi flick based almost entirely on self-awareness in dreams. I think much of the lucid dreaming community felt the same way.

This movie -- while not actually mentioning the words lucid dreaming once -- gives many courteous nods to the concept of lucidity that will leave you with no doubt of it's intention: to thrust its viewers into the topsy turvy world of unconscious reality. And if you're not a lucid dreamer... well you'll probably love it anyway; there are many other aspects that make Inception a thrilling movie experience.

The Dream is Real

Inception is something else. Directed by Christopher Nolan (The Dark Knight, Memento) - a lucid dreamer himself - this is a work of art designed to push the limits of your imagination. The richly detailed plot twists and turns through imaginary dreamscapes and physical reality. Whether you can actually tell the difference is all part of the awesome journey.

"Dreams feel real while we're in them. It's only when we wake up that we realize something was actually strange."

Inception is just complex enough to keep the viewer on their toes the whole way through, with a central theme of reality checking, something lucid dreamers will be familiar with. This is the idea of questioning whether you are awake or dreaming, in order to take control of the dream... or wake up. Cobb (played by Leonardo DiCaprio) has a spinning top for this purpose; where in reality it will always fall - but in a dream it will illogically spin on forever. There are several other clues to watch out for, like upside-down clock faces. If you can tell from the outset which scenes are dreams, you will probably enjoy this movie a lot more.

Aside from these tells, the lucid dreamscape is remarkably solid and real - until the dream collapses and it all comes crashing down, Armageddon style.

I was enthralled by the concept of the unconscious thwarting itself in this movie. This is something that happens in lucid dreams all the time. When you don't have a firm grip on your conscious lucidity, your unconscious begins to play tricks on you. This manifests itself in the inability to fly (not ideal at 35,000 feet) or frustration when specific dream figures elude you.

Inception reminds us that no matter how much consciousness we have in our dreams, the unconscious mind still has its own games to play. It is an illogical beast, at times, and intent on delivering us to our worst fears and insecurities, even in lucid dreams. As Cobb himself finds out: your deepest beliefs, however hidden, become real in dreams.

The Rules of Inception

The rules of Inception were admittedly a bit convoluted. I felt myself squirming in my seat when Cobb announced that in order to wake yourself up from a dream, you first have to kill yourself. What happened to simply opening your eyes?

I did lilke, however, the poetic notion of The Kick, required to wake the dreamers from their shared dream scenario. In reality, this feeling of falling that wakes us up is called a hypnic jerk - an involuntary muscle twitch used by the brain to test if the body is awake or asleep. It most often occurs during the onset of dreaming, and bizarrely the unconscious simultaneously incorporates this sensation into the dream scenario. For me personally, hypnic jerks always occur as I'm walking down the street in a dream, and suddenly fall off the kerb... 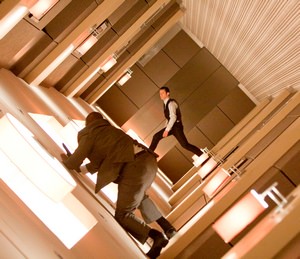 Another rule that these advanced oneironauts had to live by was that, because they were sedated, they must not die inside a dream-within-a-dream. Otherwise, they'd descend into limbo, a bland dream world that was slowed down so far, decades in limbo might only translate to minutes in reality. That's a terrifying concept in itself! But don't be fooled by this lucid dreaming myth; where Inception's rules stray from the truth, most people realize it's just a bit of speculative fiction and nothing to get your knickers in a twist about.

Commit to these rules and you will be rewarded with a gripping adventure, delving deeper into lucid dreamscapes which are rarely stable and open to invasion by unconscious demons operating on an entirely different agenda.

The People Behind The Dream

"You remind me of someone... a man I met in a half-remembered dream. He was possessed of some radical notions." ~ Saito, Inception

These lucid dream explorers form a crack team which penetrates the minds of other dreamers and roots around in their unconscious, looking for secrets.

Inception is, for Cobb, one final job in which he must plant an idea in the mind of Fischer (Murphy). If successful, he can return to his family, free of criminal charges arising from corporate espionage, and live the life of his dreams...

The score to Inception (created by Hans Zimmer) adds a further dimension to this story, drawing us into the infinite lucid dream world. Zimmer added a curious musical cue to denote when the dreamers moved from one level of reality to another: he slowed down the "wake-up music" (Edith Piaf's 1960 Non, je ne Regrette Rien) to create the haunting brass blares which recur throughout the movie and trailer. Check out this neat Inception music cue to see the effect broken down. 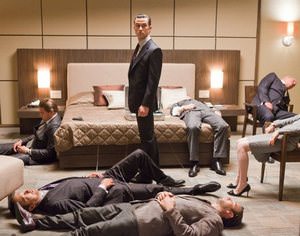 If the central plot of Inception sounds too predictable - don't worry, because this movie is a lot more complex than any non-spoiler synopsis will have you believe. Inception weaves multiple threads into an exquisite tapestry, leaving you reeling as you walk out of the movie theater with myriad questions and insights. The ending is deliciously ambiguous allowing for post-movie debate.

There are parts of this movie that resonate with all-time sci-fi favorites. At times, Inception felt like The Matrix (for its original reality-busting storyline and special effects) as well as Donnie Darko (for its mysterious and interpretive themes and conclusion).

As a whole, this is an original and gripping movie balanced on the concept of lucid dreaming and the wily unconscious mind. Even with extended gunfire scenes (its only real downfall, in my opinion) there is so much thought-provoking material here to keep you entertained for the long haul. Inception is a must-see movie for lucid dreamers and definitely among my new top ten favorites.