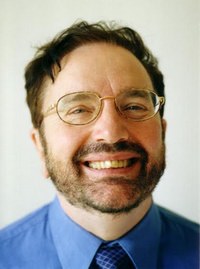 Dr Keith Hearne is a British psychologist and the first person to create scientific proof of lucid dreaming in the laboratory via his ocular-signalling technique, in 1975.

Dr Hearne went on to perform many more experiments in the realm of dreams and premonitions. In this exclusive interview, Dr Hearne talks about the moment he received the first conscious signals from a lucidly dreaming individual, as well as the ensuing physiological and psychological discoveries made on lucid dreaming for his PhD.

What was it like when you got the first ever signals from within a lucid dream?

No one before had ever witnessed what I saw in the sleep laboratory at Hull University, England at about 8am on the morning of 12th April 1975.

The previous night I had instructed the male subject who reported having fairly frequent 'lucid' dreams (in which the dreamer becomes fully conscious and has full critical cognitive faculties whilst still in the dream) to make seven or eight left-right eye-movements on becoming lucid.

After all, REM means Rapid Eye Movement sleep, so surely the ocular muscles could be operated deliberately when lucid. I had devised the signalling method in an attempt to circumvent the profound bodily paralysis of REM (dreaming) sleep - which inhibits any physical signalling.

The subject was 'wired up' to a sensitive multi-channel chart recorder. With great anticipation, I had been watching each REM-period during the night. Just before 8am the subject had been in indubitable REM sleep for about half an hour.

There was a long REM burst, nothing unusual, when, suddenly, out of the randomness, the requested, deliberate, sequence of large zig-zag movements appeared in the two channels monitoring eye-movements: 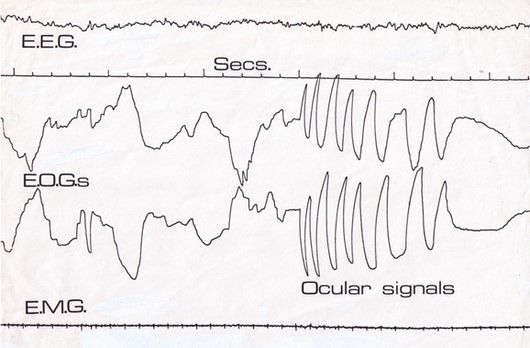 On waking, the subject described how he suddenly realised he was dreaming, and consciously made the signals before continuing the lucid dream experience. They were the first ever signals communicated from within a lucid dream.

It was like getting SETI signals from another solar system. I was ecstatic, but had to keep quiet not to awaken the subject!

It was an amazing, mind-boggling, situation. I was looking at a communication from a person in another room who was asleep, 'unconscious', dreaming, yet in his own vivid world in which he was perfectly conscious and interacting with others. It was his reality - I was in my reality. A channel of communication had been established between those two realities.

The original chart-record, and my dream machine invention, are now on permanent display in the London Science Museum. The whole PhD thesis and my book The Dream Machine2 may be downloaded for free at my website KeithHearne.com. 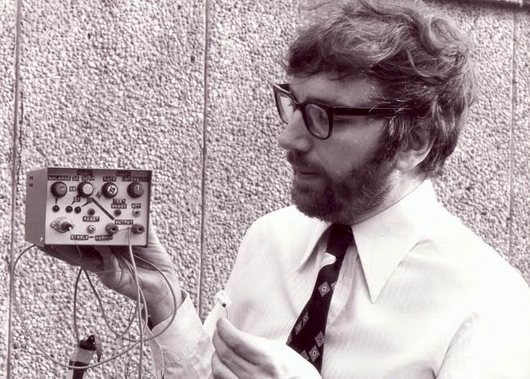 The technique opened up a doorway into a whole new area in dream research - the dreamer was able to send out real-time information, say on experiments, conducted in the strange environment of the inner-space universe. (On another 12th April, in 1961, Yuri Gagarin first went into the outer-space universe.)

A few months later I was given my own sleep-laboratory at Liverpool University, and over three years discovered the basic physiological and psychological phenomena of lucid dreaming, for my PhD1.

Among the discoveries were:

I am very honoured that April 12th is now being recognised as Lucid Dreaming Day to mark this breakthrough research.

Can you tell us about your separate work on premonitions?

I'm fascinated by premonitions. Alongside my main lucid dream work, I had performed many experiments (some using very advanced technology) into parapsychology, in the very artificial situation of the laboratory - with mixed results - but then one day I had a 'real life' experience.

I was about to make a familiar, routine, ferry journey across the broad Humber estuary when I 'knew' with complete certainty that something untoward was going to happen on that vessel. I'd never had such a feeling before. I stopped and thought, but decided to go aboard. On the journey it got dark, and later there was a cry of 'Man overboard!' Someone had actually fallen into the water. After a long time of searching, the passenger was dragged on board. I saw resuscitation being performed.

The event spurred me to investigate real-life premonitions. Later I wrote a book on my fairly extensive research called Visions of the Future4.

An analysis of cases identified a sub-group of premonitions that seem to be very accurate, which I termed 'Media announcement type' - say TV, radio, newspaper, items that are seen/heard before the unexpected event. One such case concerned the Flixborough chemical plant disaster in the UK.

These anomalies must be considered in our attempts to make sense of this amazing world in which we find ourselves. Simple explanations are not enough.

What has your research told you about non-lucid dream interpretation?

I think ordinary dreams can indeed be 'metaphors in motion'5,6,7are a way by which the unconscious can provide useful information to the dreamer.

I would recommend readers to look at The Dream Oracle8 book by David Melbourne and myself. David came up with the extraordinary technique, which is based on the letters of the alphabet, and provides a completely new method - greatly facilitating that communication.

As a prolific composer do you find musical inspiration in your dreams?

I enjoy writing music - and had a fantastic time composing the music for a full-length ballet called Princess of The People in conjunction with Dame Gillian Lynne (who choreographed Andrew Lloyd Webber's Phantom of The Opera andCats). Some pieces were recorded for a CD by the Moscow Symphony Orchestra. 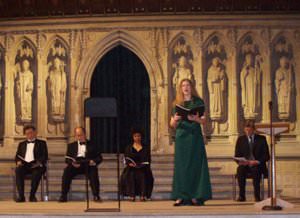 Other compositions include a full Requiem, a Musical, a Guitar Concerto, a Holocaust Memorial piece, an Anthem for Armenia, and several Songs (including religious pieces separate from the Requiem - Ave Maria, Pie Jesu, Nunc Dimittis, Magnificat, Our Father), and a 'Cello concerto. Currently I'm working on an exciting Opera.

Some of my music originates in the wonderfully creative source of the dream world. On waking, I dash to the synthesizer to record the fragment!

I know what triggered my interest in visual imagery, then dreams. As a child of about six, my teacher said to me: "You know when you daydream, Keith, and see pictures...". I was puzzled by what she was saying, but I realised later that I have no visual imagery (in wakefulness) whatsoever. Other children though, were saying "Yes Miss". I realised at that early age that there are major individual differences in people.

The thought stuck in my mind. Later, when an older sister was at College, she brought home books by Freud, Jung, etc. I read them avidly, so that also cemented my interest in dreams.

As an undergraduate at Reading University in England, I developed a 'tracing' technique enabling subjects, in hypnosis, to externalise their internal imagery9. I termed the method 'hypno-oneirography'.

The subject sits in front of a large drawing board, in hypnosis, and is instructed to have a vivid hypnotic dream (or even to explore a 'past life'). The dream imagery is stopped on command, then the subject opens their eyes, 'projects' the freeze-framed image onto the board and traces the image. Colours are described, and later painted-in. Sequential stop-starts can reveal scenes from a whole imagery-experience.

A 'scene-change effect' was immediately discovered. It seems that the 'pixels' of the 'before' picture simply get re-arranged into a new scene, by a 'law of least-effort'. These effects occur in nocturnal dreams too. I'd like to see my effect in a Hollywood film! 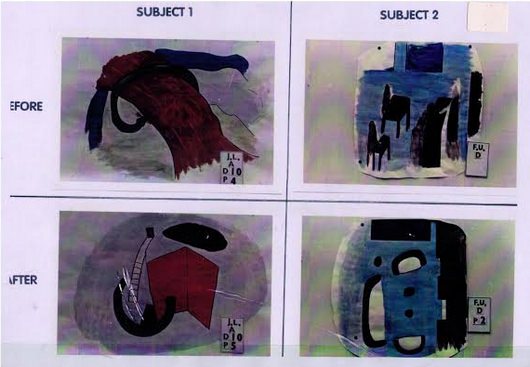 When anyone is a pioneer in a new field, a few over-enthusiastic individuals will try to 'jump on the band-wagon', and make claims of association and even priority. So, some people (mostly in America) have completely the wrong idea about the beginning of sleep-lab research into lucid dreaming, and my pioneering role. Lazy journalists have unintentionally perpetuated that misinformation.

Things are changing now, I'm pleased to say. The internet has been good for this - all the information is there, for all to see. Those new, modern writers who demand accuracy in memorialising the history of science (such as Daniel Love) are steadily putting the record straight.

What are you working on now?

I'm well into writing a major book now, which introduces new concepts. It will upset some people. Also, I'm composing a dramatic opera based on a real person from history. I'm also contributing to the English translation of Hervey St Denys' landmark book on lucid dreaming, a project called Translating Dreams, now fundraising on KickStarter. I have a few inventions I'd like to work on, too - but I have to ration my time!