Join The Lucid Celebrations at The Annual Online Event 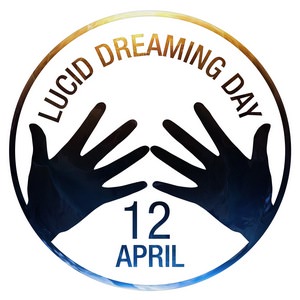 Every year on April 12th, lucid dreamers around the world unite to celebrate the annual Lucid Dreaming Day.

This exciting opportunity provides a platform for passionate lucid dreamers to meet other oneironauts, take part in dream challenges, win prizes, hear from the experts and introduce the uninitiated to the wonders of dream exploration.

The event is a collaboration of lucid dream experts and researchers which is hosted online - so turn up in your pajamas and join the celebrations!

Join me now in considering the scientific roots of lucid dreaming that make April 12th such a landmark date. Plus, find out how your support of this artistic, entertaining, therapeutic and philosophical tool can benefit oneironauts around the world for generations to come.

One Small Ocular Movement For Man. One Giant Leap for Mankind.

Lucid Dreaming Day falls on the historic date of April 12th when, in 1975, lucid dreaming was first scientifically proven by Dr Keith Hearne.

"If lucid dreaming were to be compared to space exploration, then the achievements of English psychologist Keith Hearne could be considered comparable in magnitude to those of NASA during the time of the first moon landing."

For it was Hearne who first demonstrated a method by which we can communicate to the waking world during a lucid dream.

He exploited the nature of Rapid Eye Movements (REM) to have an experienced lucid dreamer called Alan Worsley perform a pre-defined set of eye movements during his lucid dream.

After a false start (in which Worsley performed the routine but the recording equipment had been shut down for the night), Hearne successfully recorded Worsley's smooth and deliberate eye movements on an electro-oculogram (EOG) at around 8am on the morning of April 12th, 1975:

"Suddenly, out of the jumbled senseless tos and fros of the two eye-movement recording channels, a regular set of large zigzags appeared on the chart. Instantly, I was alert and felt the greatest exhilaration on realising that I was observing the first ever deliberate signals sent from within a dream to the outside. The signals were coming from another world - the world of dreams - and they were as exciting as if they were emanating from some other solar system in space."

Hearne's EOG experiment was formally recognized through publication in the journal for The Society for Psychical Research. Unfortunately, this fell short of the required reading material for most relevant experts and his work went widely unknown.

A few years later, in 1983, Dr Stephen LaBerge performed another ocular signaling experiment at Stanford University. He went on to forge a lifelong career in the field of lucid dream research and is a widely known expert on the subject, often credited for being the first to scientifically verify lucid dreaming.

The media fell in love with the romantic idea of lucid dreaming being a real phenomenon and today it frequently hits the headlines - curiously, in both science and paranormal media streams.

Clearly, both Hearne and LaBerge have played significant roles in this field and it's important that we recognize both of their contributions over the years. But on April 12th, we'll remember the Neil Armstrong of lucid dreaming: the humble shop worker, Alan Worsley, and his landmark eye movement signals to Dr Keith Hearne working through the night in his sleep research lab.

Why Awareness Means a Better Future for Lucid Dreaming

Musical albums, Hollywood movies and science fiction novels have all contributed to its presence in our popular culture in the last decade. We already have great momentum behind us.

To keep raising awareness of lucid dreaming as a regular nocturnal pastime means that more students of tomorrow will:

Not only will greater interest lead directly to new developments in our lucid dream technology (from induction devices, to dream playback machines, and even experiencing shared dreams one day)... it will also afford us huge opportunities to better ourselves as individuals and mankind as a whole.

I believe that if every human being were to start harnessing the power of lucid dreams then our culture, art, technology, medicine, science and beliefs would quickly evolve in a whole new direction. The human race would be enriched as a result, both individually and universally.

That certainly gives us something to strive for on Lucid Dreaming Day.