Do Video Games Improve Your Ability to Lucid Dream?

Do video games affect your ability to lucid dream? Can lucid dreaming be inspired by video games? Is there any correlation between the two?

I believe there is a relationship; that whatever you do during the day can become the kindling for dreams you have at night. Have you ever spent a lot of the day doing a particular activity, and then found yourself doing the same thing in your dream? What if that activity was a type of virtual reality? Would that virtual reality become your dream reality?

My First Taste of Lucidity

When I was a child, I used to get nightmares. During the climax of terror, the only option was to run or hide. Part of me knew I was just dreaming, and sometimes I would attempt to abort the dream by thinking "wake up!"

However this rarely worked at all, let alone in the moment before getting stabbed, impaled or killed by whatever monster was attacking me. Nightmares were those things that happened every now and then that were just an unfortunate part of life. I would avoid watching horror films, in case they brought on a nightmare that night. But I did not avoid violent video games...

I have always been a fan of video games, and have been playing games since I was five years old (back then on my Commodore 64). One day, when I was about ten years old, I discovered a game called Wolfenstein 3D. This game was different from the others, because it was in first-person perspective. This means that instead of the usual way of controlling a hero, car or spaceship in the third person perspective, I got to look through the eyes of the protagonist: 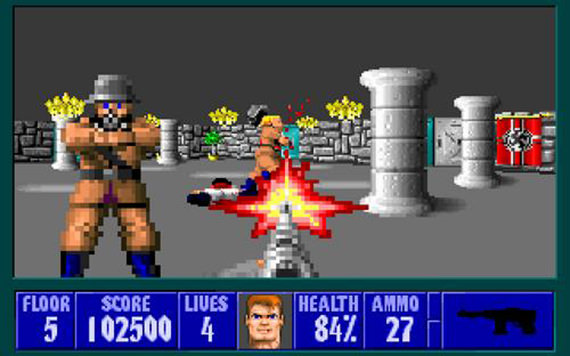 Needless to say, I spent all day that day playing Wolfenstein 3D. The object of the game was to shoot your way through a Nazi castle and kill Hitler himself.

That night I went to bed, and I had a dream. The dream was that I was being chased by Hitler through an old dusty mansion. It didn't look like Wolfenstein, it looked like real life. I was not the hero with guns and knives, I was myself, ten years old and scared of being captured. I found myself running into a room, closing the door, and hiding in a fireplace. I hoped that Hitler wouldn't find me, but sure enough, the door on the far side of the room opened. Hitler walked in.

I snapped. This is MY dream! I jumped out of the fireplace and roared at Hitler. Suddenly I knew I was all-powerful. I glared at Hitler as he stood agape, held up my left arm and suddenly there was a massive machine gun on my arm. My right arm followed, another massive machine gun. I leveled them both directly at Hitler. As I pulled the triggers, he turned and ran. I shot after him, laughing.

That was the last nightmare I've ever had.

Video Games as a Cure for Nightmares

Since then, any time a dream has become frightening, the fear has triggered a lucid state. It always follows the same pattern:

These days, there are many realistic first-person perspective video games that will allow you to deal with most kinds of fear. For instance, if your nightmares present you with a fear of falling from great heights, I recommend the video games of Prototype or B.A.S.E. Jumping.

If you have nightmares about zombies, Left 4 Dead is fantastic. These first-person video games teach us that the real power is in our own hands. When we die in the game, we just start the level again. Not unlike a lucid dream. And when we get hit in a game, we feel no pain.

No matter what we do in the game, we're still sitting in a comfortable couch in a warm house. The reinforcement that nothing can actually hurt us can transfer into our dream world - transforming our nightmares into lucid dreams. 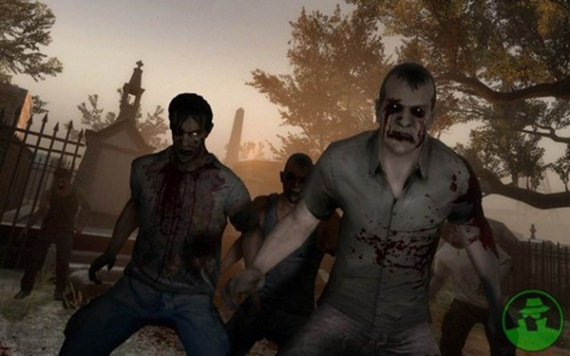 For more information on Jayne Gackenbach's research into the link between video games and lucid dreaming, see The Science of Lucid Dreaming: The Electronic Media Effect published by Lucid Dreaming Experience.