Ever Dream This Man?

Every night throughout the world hundreds of people dream about this face. What about you..?

That's the claim of a website called ThisMan.org which tells the story of how, in New York in 2006, the patient of a well-known psychiatrist drew the face of a man that had been repeatedly appearing in her dreams. Later, another patient recognized the portrait and claimed that the same man also visited him in his dreams.

The story goes, that the psychiatrist circulated the image among other patients with recurring dreams and found four others who dreamed of This Man. The snowball effect continued until more than 2,000 people claimed to be dreaming of This Man.

In 2009, a website was launched telling the story of This Man, with anonymous quotes from thousands of people talking about this apparently benevolent character appearing, sometimes repeatedly, in their dreams.

The website has accrued several portraits of This Man: 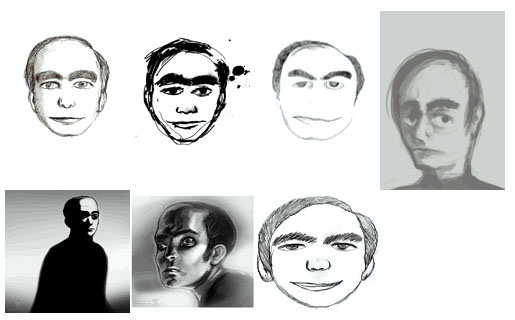 Dreams of This Man

The site also published a number of anonymous dream quotes:

"I have had this recurrent dream for some years now. A tall, dark man shows me a picture and asks me if I can recognise my father in it. The man in the picture is this man I have never seen before, he looks nothing like my dad, nevertheless I inexplicably answer that I do recognize my father. At this point I usually wake up feeling very peaceful. Other times the dream continues, I am standing before my father’s grave, I place some flowers on the ground and I realise the photograph on the tombstone is missing."

"I fell in love with him from the very first time I saw him in my dream. Even though if I think about it I must admit he’s really ugly. And yet each and every time, he sweeps me off my feet with his romantic gestures and sweet words. He buys me flowers, jewellery, he takes me out to dinner or to the beach to watch the sunset."

"I have always had this dream of flying in the sky over my city and observing my friends from up there. Since I moved to another house I started meeting this man while flying. Not every single time that I have this dream about flying, but often enough. He flies too, but he never speaks."

"The first time I had a dream about this man I was having a hard time at work. I had a dream about getting lost in a huge and deserted shopping mall. Suddenly this man appeared and I started running away from him. He chased after me for what seemed like an hour until I found myself against a wall in the kids’ area in a supermarket. At this point he smiled at me and he showed me the way out towards the cash desks and I woke up. Ever since that night this man has appeared in all of my dreams and he always gives me directions to get out of the dream and wake up."

"I dreamt this man… was Brazilian and very handsome. He was a schoolteacher type with 6 fingers on his right hand. He said if the US had a nuclear disaster: go North!"

"I have seen this man in 3 completely different dreams. He was slightly different from the picture, but I recognized him immediately. He appeared suddenly and disappeared in the same manner. His message in all 3 of my dreams was: 'It’s all over.' That was repeated 3 times in each dreams. The differences in the picture and the man in my dreams are: his hair was a little longer in the top; his eyebrows were not as bushy. Other than that, he is identical. I had no fear of him, but many questions."

Theories of This Man

What's the deal? ThisMan.org offers us some innocent and not-so-innocent explanations for the origins of This Man:

The Truth About This Man

It turns out, we may not need a special theory to explain This Man after all.

The site turns out to be created by Andrea Natella, a marketing strategist who runs the firm Guerilla Marketing, which designs subversive hoaxes to drum up public interest.

The site was soon bought by horror movie production company, Ghost House Pictures, to be used as part of the promotion for an upcoming film titled (guess what...) This Man.

What I like about this hoax is that not only does it pique our interest on a profound level (there were so many juicy explanations for This Man) but the portrait itself is compelling even without the backstory. That's because This Man is Every Man.

Of course, there is one other theory: